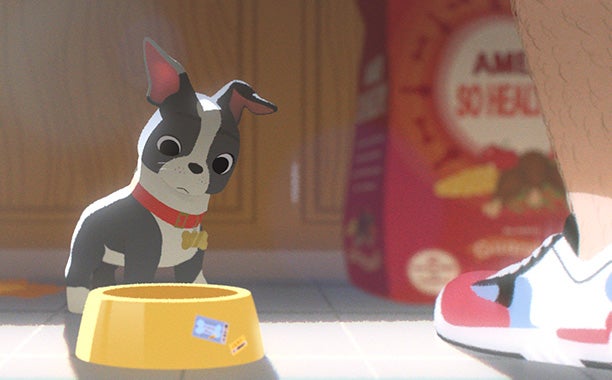 When Disney's newest full-length animated feature, Big Hero 6, hit theaters this November, it will be one of two animated films from the studio.

As is traditional for Disney films, a short animated film called Feast will play in theaters before Big Hero 6. And Feast is a real Treat.

Feast tells the story of Winston, possibly the cutest animated Boston terrier ever. The story begins when Winston is a puppy, scrounging for food among the discarded trash of the humans around him. Suddenly, a hand lowers a French fry to puppy level, and Winston has found his "furever home," as pet enthusiasts call it.

No longer nosing for cheese in burger wrappers, Winston is treated to a wide variety of the delicious, unhealthy, and largely processed foods his human eats, with an occasional bowl of kibble thrown in. But when his human meets a woman who is studying to be a chef, and clearly a health food fan, Winston's life is thrown into turmoil. After all, how can a dog choose between the foods he loves, and the happiness of his human best friend?

Most films aimed at children throw in a smattering of jokes for the adults who will end up watching as well, be they a dated pop culture reference, or a suggestive innuendo that (hopefully) sales right over the heads of the children. Feast succeeds in a much rarer and harder way. The same parts of Feast that appeal to children also appeal to adults. After all, the Internet has proven time and again that

a cute animal video is something that people of all ages enjoys. Winston may be a cartoon dog, but he is as adorable and lovable as a real one. His attempts to scarf down everything from pizza to pasta to nachos are both cute and hilarious. (And if you have ever owned a dog, or even a wily cat, highly relatable.) Even though the film has nearly no dialogue and everything is seen from a dog's eye view, there is never a moment that is hard to follow, not even the relationship between the human characters.

Feast is a charming lead-in to Big Hero 6, with a strong and simple message about love, family, and those we share our meals with.

Persona Anniversary Announcement Isn't What Fans Were Hoping For

Night of the Animated Dead: Dule Hill and Katharine Isabelle Board Up the House In Exclusive Clip