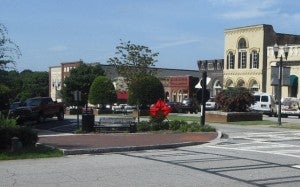 While it's unclear whether May 31 will be the first day of shooting for the third season of AMC's zombie hit The Walking Dead, that's when the survivors will make their way back to Senoia, Georgia, and the spot that location manager Mike Riley identifies as the season's "main set," according to local reports. The Citizen of Fayetteville, Georgia, reports that shooting at Raleigh Studios in Senoia will begin on May 31 and continue until November, constructing a "safe zone" there against zombies which Riley described as being "ruled by a benevolent dictator." That sounds to us like the beginnings of the "Ricktatorship" described at the end of last season and in interviews since--but most fans were expecting that to occur at the prison, and Riley describes the action as moving from the country to the city and then back again, never mentioning a prison.  The most logical options are that either Rick and company have to make temporary camp in a city before finding the prison; that they're simply omitting the word "prison" for he sake of keeping the plot quiet and the "walled in city" he described is actually the prison; or that the set it a stand-in for Woodbury and that the true nature of The Governor is not immediately evident.

Filming on The Walking Dead Season 3 to Begin in May