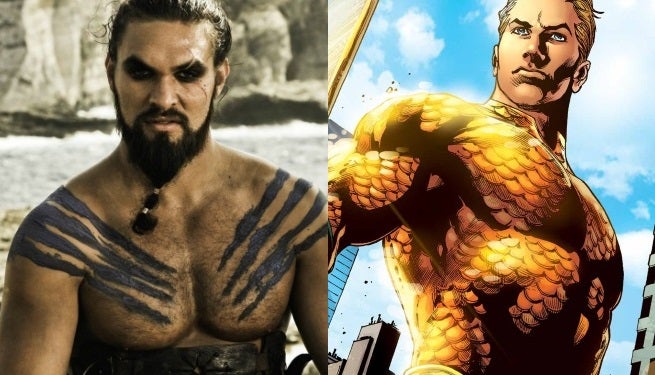 Though Jason Momoa was on television as early as 1999, in Baywatch Hawaii, and played Ronon Dex for five season of Stargate Atlantis, it was his 10 episodes playing Khal Drogo in HBO's Game of Thrones that truly earned Momoa the following he has today.

That following is about to plunge into the sea, as Momoa has officially been announced as Aquaman in Warner Bros. DC Entertainment film universe. This includes an Aquaman solo film in 2018, a probably appearance in the Justice League movie that precedes it, and possibly even a role in Batman v. Superman: Dawn of Justice.

George R.R. Martin, the author of the A Song of Fire and Ice novels on which Game of Thrones is based and creator of the character Khal Drogo, is apparently among Momoa's staunch supporters. The longtime comic book fan tells MTV that he fully endorses Momoa as the choice for Aquaman.

"It's pretty extraordinary," Martin says. "Jason Momoa is fantastic. He was wonderful as Khal Drogo. I wish we could've kept him for another ten seasons."

Martin went on to mention how Momoa, most likely jokingly, kept telling him to write a prequel story about the adventures of young Khal Drogo so that Momoa could return to the role.

"I guess I won't be able to do that now," Martin said, "because he's tied up being Aquaman!"

Martin is currently out promoting his new book, The World of Ice and Fire, which hits bookstores November 20.