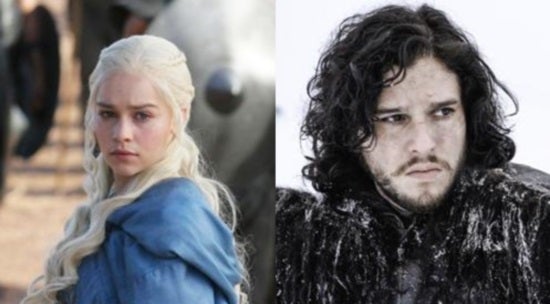 Emilia Clarke (Daenerys Targaryan) and Kit Harington (Jon Snow) teased a bit of what fans can expect from their characters in Game of Thrones' upcoming fourth season. Speaking to Access Hollywood at the Screen Actor's Guild Awards Ceremony, Clarke was mostly coy, but let on a bit about how Daenerys gets to sit in that throne seen in the fourth season's trailer, saying that "Her dragons help" and that Daenerys would be a bit darker and more confident than in previous seasons. Harington was a bit more forthcoming, saying that Jon Snow would be taking on a leader's role in Season 4: "He's speaking and fighting for himself. It's a big season for him. He's got a lot to do… This season, he turns into a leader. He doesn't have an older male figure speaking for him." Harington also said there would be a lot of death in the season. Between that and Clarke's comment about a darker Daenerys, it seems Game of Thrones will be maintaining its reputation of brutality. Game of Thrones Season 4 will premiere on HBO on April 6, 2014.

Game Of Thrones: Emilia Clarke and Kit Harington Tease What's Ahead In Season 4