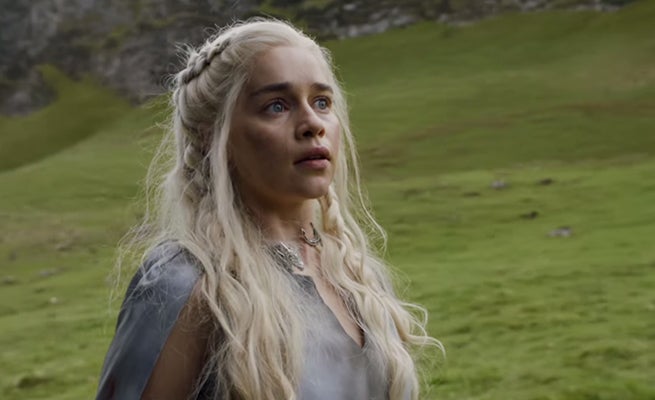 Still trying to digest that last visit to Westeros of season five? You're not alone. Capping off a season of shocking moments including (but not limited to) Stannis sacrificing his daughter, an epic battle of Jon Snow vs White Walkers, and Daenarys riding a dragon, "Mother's Mercy," came along and found a way to match those moments in season five's final hour.

Be warned - we're getting into spoiler territories. Only read further if you've watched the Game of Thrones season five finale because this is certainly an hour of television you do not want spoiled.

Still with me? Okay, then let's continue.

Below, we've compiled the five most shocking moments "Mother's Mercy." Though, some are obviously more shocking than others, in all, the episode packed heart breaking and infuriating moments into all of it's fireworks. Honorable mention: Daenarys being reunited with her Dothraki tribe. Although much of this episode seems to be making season five pose as a 10 week time loop, Daenarys being reunited with the Dothraki's is exciting because her story had fallen a bit flat, at least until Tyrion came to town. The smarty-pants Daenarys is had the presence in mind to whip that ring off of her finger. Is she going to be spending a lot of time with the Dothraki to become Khaleesi, once more? Or will the Dothraki resent her for what happened to Khal Drago?

The scene between Jamie and his daughter was beautiful. Of course, the Dornish took it from us with that poisonous lipstick, hopefully that doesn't take 10 episodes in season six to resolve, but Jamie's transformation has been like nothing ever on television. The character was one of the most despised - ever - but now he has found and followed a path to redemption both as a character and in the eyes of the audience.

Anyway, without further adieu, let's take a look at the five most shocking moments the Game of Thrones season five finale had to offer.

Perhaps in one of the more anticlimactic moments of the season, Stannis Beratheon met his ultimate demise. The fight between Stannis and the Bolton's which was built up for almost the entire season was (for the most part) skipped cinematically, but Stannis's death was not. After being worn down in battle, Brienne of Tarth took his head as he lay against a tree.

Most of us viewers hoped to see Stannis reign supreme in Winterfell (until last week, anyway), seeing as Ramsey has been a psychotic freak abusing one of the last remaining Starks. Unfortunately, his siege was a failure. Even after a series of sacrificial and overall awful, selfish decisions, Stannis lost the battle and his life in the finale.

As great as it is to see Cersei suffer after all the cruelty and manipulation she has exhibited through the years, it's a bit frustrating it has to be at the hands of other characters we hate. Cersei had to bare all in front of those she once ruled. The atonement to her eventual "freedom" as she looked up at the castle she once smugly looked down from was an unexpected path for the finale, but I still hope to see each of those Sparrow's bleed. Jamie and Bronn, save us all!

It looked like Sansa was in trouble when Myranda pointed her bow to her as the useless Reek stood by. Just as Myranda was about to take her shot, Theon burst out of Reek, if only for a moment, and tossed Myranda from the balcony on which they stood. Myranda flipped through the air before smashing face first into the ground. I don't think she's coming back from that one. Theon and Sansa eventually leaped over Winterfell's walls into who knows where.

Arya ripped her mask off just before what would have been the finale's most shocking moment if not for Jon Snow, but we'll get to that. Finally, Arya came in contact with someone from her "Kill List." In fact, the number one name on that list: Meryn Trant. Remember, Meryn Trant killed her sword trainer, Syrio Forel, back in season one (the glory days where Ned Stark was still alive).

Yeah, we expected Arya to kill him. What was shocking was the manner in which she did it: One eye. Two eyes. Stab, stab, stab, stab, stab in the chest. Epic monologue speech full of hate, declaration of "I'm Arya Stark," then "You're no one," and to top it all off, an intimate slashing of Meryn's throat. WHOA. Cold blooded. Shocking.

With triumph in Game of Thrones, comes triple as much heart break and peril. Jon Snow, the man who has risen to become everyone's favorite character this season (although Tyrion really is number one for me, and Bronn is pretty damn cool), was shanked by those lovely men of the Night's Watch. Even little Oliver, you little.... Is he actually dead? It sure seemed like it. Given Thrones's track record, he probably is. Hopefully, that doesn't mean Jon's story is through, though. It's possibly and widely expected that either Melisandre will use her powers to bring Jon back to life as Azor Ahai, the warrior who leads the war against the White Walkers, or he'll become a White Walker. At this point, I hope he becomes a White Walker and those beasts destroy 99% of Westoros.

What did you think of the Game of Thrones season five finale? Which moment really blew your mind? Is Jon Snow actually dead? So many questions... Share your thoughts in the comment section and brace yourself - Game of Thrones off season is coming.