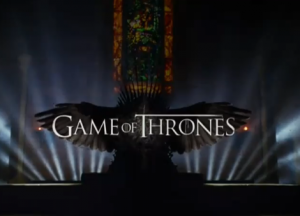 HBO's Games of Thrones is the most-pirated TV show on the Internet, with legal sales of the series competing with more than 4 million illegal downloads per episode. So some--especially anti-piracy activists in Hollywood--are likely surprised to hear the pay network's programming president Michael Lombardo say that he believes piracy is a "compliment" to the show and has not hurt sales of the DVDs and digital copies. "I probably shouldn't be saying this, but it is a compliment of sorts," Lombardo told Entertainment Weekly. "The demand is there. And it certainly didn't negatively impact the DVD sales. [Piracy is] something that comes along with having a wildly successful show on a subscription network." HBO does their best to ensure the demand is there; unlike most other networks, they don't make single issues available digitally during the season, opting instead to allow only HBO subscribers access until the DVD release a year later. In February, Game of Thrones season two was the company's biggest first-day home video release of all time, selling 44% more than its first season. Digital sales of individual episodes reached 355,000, up 112% from season one. That doesn't mean, of course, that they won't protect their copyright, just that they don't perceive piracy as a threat. "We obviously are a subscription service so as a general proposition so we try to stop piracy when we see it happen, particularly on a systematic basis when people are selling pirated versions," Lombardo told EW. It's just that HBO "hasn't sent out the Game of Thrones police."

Game of Thrones Piracy Not a Huge Concern for HBO