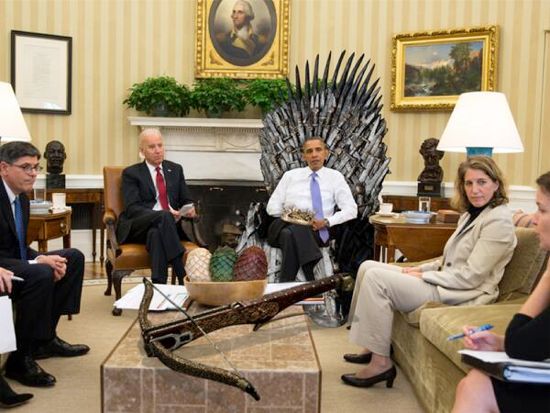 President Barack Obama has made no secret of being into pop culture. From professing to being a fan of Spider-man to referencing Star Wars, President Obama would be right at home at Comic Con. During the White House Correspondent's Dinner speech on Saturday, President Obama even made a Game of Thrones reference. "This year I promised to use more executive actions to get things done without Congress," said President Obama. "My critics call this the imperial presidency. The truth is, I just show up every day at my office and do my job. We've got a picture of this I think?" The screen then showed a photo of President Obama sitting in the Iron Throne in the Oval Office. There is a crossbow on the table in front of him. After the audience laughed at the photo, President Obama quipped, "You would think they would appreciate a more assertive approach." After the White House Correspondent's Dinner, the official White House Twitter account tweeted the image, along with the text, "The Westeros Wing. #WHCD"