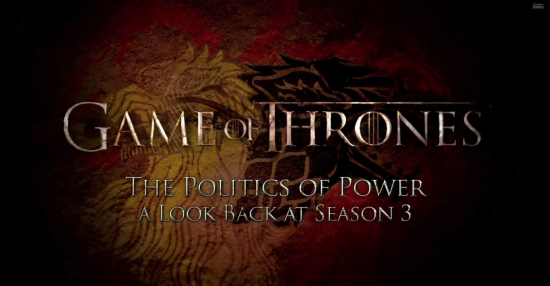 Hey Game of Thrones fans, has it been a while since you watched Game of Thrones Season 3? Do you wish you could re-watch the season, either on Blu-ray or via HBO Go, so that you have the events fresh in your memory for the Season 4 premiere, but just can't find 10 hours to spare? Well, it looks like HBO has you covered. They've released a 25-minute video, titled "Game of Thrones Season 3 Recap: The Politics of Power," that touches on all of the last season's major events. It's the perfect refresher to make sure you remember where all of the major characters were left at the end of last season and will make sure you aren't left confused by where Season 4 picks up. You can check out the entire video below. It should go without saying, but just in case, the video is full of SPOILERS for Season 3 of Game of Thrones. I mean, it would be kind of a terrible recap video if it wasn't full of spoilers, right? In Game of Thrones Season 4, Encouraged by the Red Wedding slaughter in the Riverlands that wiped out many of their Stark nemeses, the Lannisters' hold on the Iron Throne remains intact…but can they survive their own egos, as well as new and ongoing threats from the south, north and east? While an unbowed Stannis Baratheon continues to rebuild his army in Dragonstone, a more immediate danger comes from the south, as Oberyn Martell, the Lannister-loathing "Red Viper of Dorne," arrives at King's Landing to attend Joffrey's wedding to Margaery Tyrell, and perhaps act on an ulterior agenda. In the north, a depleted Night's Watch seems overmatched against the inexorable Wall advances of Mance Rayder's army of wildlings, which in turn is being trailed by an even more formidable foe: the undead White Walkers. As if that weren't enough, Daenerys Targaryen, accompanied by her menacing trio of dragons and army of Unsullied, is poised to liberate Meereen, the largest city in Slaver's Bay, which could ultimately provide her with enough ships to sail to Westeros and reclaim the Iron Throne. Game of Thrones Season 4 premieres Sunday, April 6 at 9 PM ET, so make sure you find some time to watch the video before then.

Funko Fair 2023: Here's Where to Get Funko Pop Figures And Exclusives For Day 3