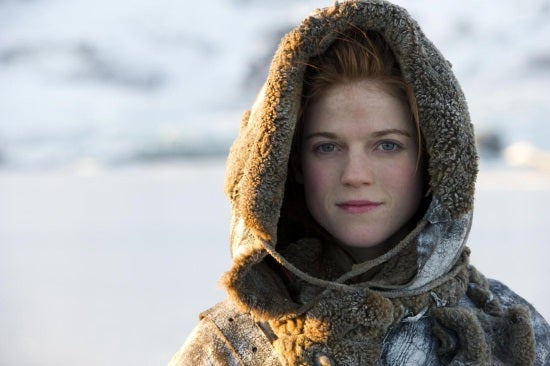 One of main storylines of the third season of "Game of Thrones" was the romance between Jon Snow, a sworn brother of the Night's Watch, and Ygritte, a Wilding woman from beyond the Wall. It didn't end well and Ygritte will be a changed woman in "Game of Thrones" Season 4 because of it. "She's a very different animal," Rose Leslie, the actress who play Ygritte, told Entertainment Weekly. "She's not so playful. She shuts up more and is monosyllabic. She's been hurt. We see a very different side of her. It harkens back to wronged woman are dangerous, and she's incredibly dangerous this season. She's on a mission…She wants vengeance. She wants to make sure Jon Snow feels as much pain as she feels." In the "Game of Thrones" Season 3 finale, Jon Snow – who had been acting as a deserter to fool the Wildlings – finally found his opportunity to escape and made a break for the wall. Ygritte fired arrows at him, wounding Jon but not killing him or even stopping his escape. Was she trying to kill him, or just stop him? "It was neither," Leslie says. "In my mind, she wasn't shooting to kill him. She wasn't shooting to stop him. I think she was shooting to hurt him. That he wasn't going to get away with leaving without any consequences. She's in love with him and can't bring herself to kill him. She could have killed him in one fell swoop with an arrow through the heart if she wanted to." In "Game of Thrones" Seasson 4, encouraged by the Red Wedding slaughter in the Riverlands that wiped out many of their Stark nemeses, the Lannisters' hold on the Iron Throne remains intact… but can they survive their own egos, as well as new and ongoing threats from the south, north and east? While an unbowed Stannis Baratheon continues to rebuild his army in Dragonstone, a more immediate danger comes from the south, as Oberyn Martell, the Lannister-loathing "Red Viper of Dorne," arrives at King's Landing to attend Joffrey's wedding to Margaery Tyrell, and perhaps act on an ulterior agenda. In the north, a depleted Night's Watch seems overmatched against the inexorable Wall advances of Mance Rayder's army of wildlings, which in turn is being trailed by an even more formidable foe: the undead White Walkers. As if that weren't enough, Daenerys Targaryen, accompanied by her menacing trio of dragons and army of Unsullied, is poised to liberate Meereen, the largest city in Slaver's Bay, which could ultimately provide her with enough ships to sail to Westeros and reclaim the Iron Throne. "Game of Thrones" Season 4 premieres Sunday, April 6 on HBO.