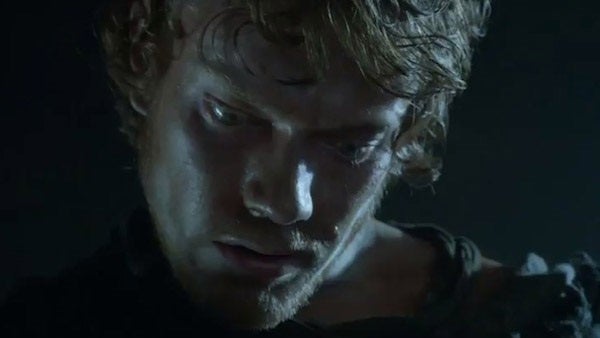 HBO has released the official recap for Game of Thrones Season 4: Episode 7, titled "Mockingbird." These recaps always run before a new episode, but, with the show taking last week off, this week's is particularly useful for jogging viewers' memories. The recap recalls Oberyn Martell volunteering to fight The Mountain as Tyrion Lannister's champion. Then we see the moment way back in Season One where we learn that Jorah Mormont has been spying on Daenerys for Varys, but goes on to save Dany's life when she is nearly poisoned. The recap then shows last episode's most shocking moment, when Petyr Baelish kicked his new wife, Lysa Arryn, through the Moon Door. Finally, we are reminded of Ramsay Snow's mission from his father and his plans to have Reek "pretend" to be Theon Greyjoy to accomplish it, Grey Worm's conversation with Missendei, the raids by Tormund's group of Wildlings, Samwell sending Ginney to Mole's Town, and the Night's Watch's mission to defend the Wall. In Sunday's episode of Game of Thrones "The Mountain and the Viper," unexpected visitors arrive in Mole's Town; Littlefinger's motives are questioned; Ramsay tries to prove himself to his father; Tyrion's fate is decided. Game of Thrones, "The Mountain and the Viper," airs Sunday, June 1 on HBO.