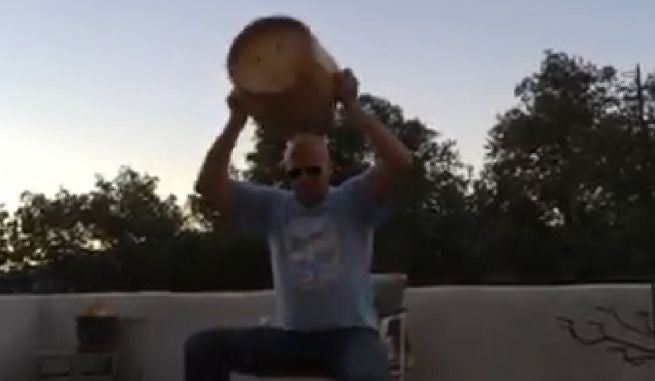 Even though the ALS Ice Bucket Challenge is earning nearly universal praise for the large amount of money that it has been raising for ALS charities, some have pointed out that California is in a drought and that it could be considered a waste of water. However, many of the celebrities that have been taking part in the ALS Ice Bucket Challenge have been doing so from locations outside of California.

And when The Walking Dead and Guardians of the Galaxy star Michael Rooker took the ALS Ice Bucket Challenge, he addressed the fact that Los Angeles is in a drought.

"We're in a drought here in L.A., so I used ice from my septic system," said Rooker.

Rooker could have used the drought as an excuse, but he found a way to make it work. Of course, we would expect nothing less from an actor who has played such badasses as Merle Dixon from The Walking Dead and Yondu from Guardians of the Galaxy.

While Rooker was initially challenged by Guardians of the Galaxy director James Gunn, he chose to jump to The Walking Dead franchise for his own challenges. Rooker issued his challenged to Walking Dead special effects guru Greg Nicotero, Norman Reedus (who plays Daryl Dixon), and the entire cast of The Walking Dead.

New The Lord of the Rings: The Rings of Power Poster Highlights Galadriel