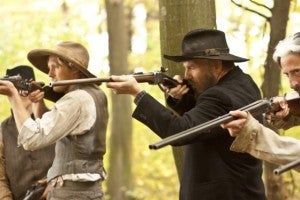 Last night's premiere episide of History's Hatfields & McCoys, a docu-drama-western dealing with the most famous family feud in American history (that didn't involve Richard Dawson), was seen by 13.9 million viewers according to Nielsen estimates, a new record for a non-sports show on ad-supported cable, according to TV By the Numbers. The record breaks the one previously set just a few months ago by the season finale of AMC's The Walking Dead, which had in turn been spending the better part of its second season breaking its own records in that regard. The show's third season will debut in October and don't be surprised if you see a ton of advertising for it, in the hopes of making a run at this impressive new mark set by History. The Walking Dead had previously beaten all comers with slightly less than 10 million viewers in one night, meaning that Hatfields & McCoys obliterated the record by 40 percent. "With all the success we have had at History, we felt strongly for some time that we should own historical drama, and in true Hisotry fashion, we have done it, with – pardon the pun – guns ablazin! We couldn't be more proud of the entire cast and crew – this has been an amazing collaboration – from Kevin Costner, Bill Paxton, Mare Winningham, Powers Boothe, Tom Berenger, and everyone involved in truly making history!" said Nancy Dubuc, President & General Manager, History, in a statement. Costner, who plays Devil Anse Hatfield in the six-hour, three-day TV event, told The Hollywood Reporter last week that other commitments, including a country music band he plays in as well as the demanding schedule of Man of Steel (Costner plays Jonathan Kent), nearly caused him to back out of the project but producers were adamant they wanted him there. Looks like it paid off. The second part of Hatfields & McCoys will run tonight on History at 9 p.m.