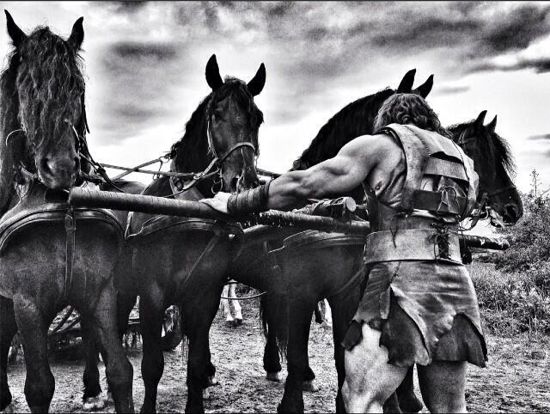 Dwayne "The Rock" Johnson has released a brand new image from his upcoming Hercules movie. Along with the image above, The Rock tweeted, "Honored to have these magnificent Friesians leading my chariot into battle daily. #MyRide #HERCULESMovie" Based on the graphic novel Hercules: The Thracian Wars, Dwayne Johnsons' Hercules film is a revisionist take on the classic myth set in a grounded world where the supernatural does not exist. The screenplay is by Ryan Condal and Evan Spiliotopoulos. Here's the official synopsis of the movie. "Everyone knows the legend of Hercules and his twelve labors. Our story begins after the labors, and after the legend…haunted by a sin from his past, Hercules has become a mercenary.  Along with five faithful companions, he travels ancient Greece selling his services for gold and using his legendary reputation to intimidate enemies.  But when the benevolent ruler of Thrace and his daughter seek Hercules' help to defeat a savage and terrifying warlord, Hercules finds that in order for good to triumph and justice to prevail… he must again become the hero he once was… he must embrace his own myth… he must be Hercules." Hercules is produced by Beau Flynn, Barry Levine and Ratner. Executive producers are Peter Berg, Sarah Aubrey, Ross Fanger and Jesse Berger. Hercules will be distributed worldwide by Paramount Pictures. Hercules is scheduled to be released at movie theaters in the United States on July 25, 2014.

Hercules Movie: The Rock And His Chariot