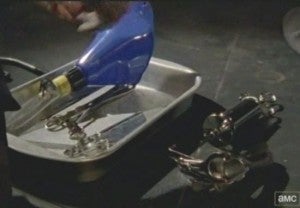 On the Talking Dead, Prop Master John Sanders walked through the items in The Governor's interrogation room. Sanders explained that in the script they wrote that the room becomes a torture chamber for The Governor. The central item in the room is a mid-twentieth century dental chair, which is what The Governor's victim would be chained to. The Governor's torture tools include a deer saw for cutting bone away, scalpel, tools for cutting off veins and arterial bleeding, an eighteen hundreds bone saw, knives for chopping, needles, an electric bone saw, a funnel to force someone to drink water so they don't die, a catheter, and pills. However, one of The Govenor's torture tools shown on the "Prey" episode wasn't mentioned on the Talking Dead. The Governor also had a speculum, which is a medical tool used for investigating body cavities.

Inside The Governor’s Torture Chamber On The Walking Dead