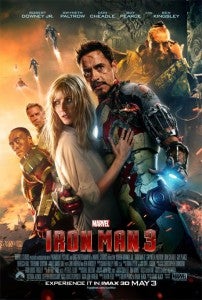 If you've been having a hard time tracking down presale tickets for the most anticipated movie of the summer since they went up for sale last week, there's a reason for that: your theater is probably not selling them in the hopes of hurting the movie's bottom line. According to a report out from Deadline this morning, a number of theater chains including AMC, Regal and Carmike are refusing to pre-sell tickets to Iron Man 3 to protest the fact that Disney is purportedly using the film to get leverage from exhibitors, angling it for a better distribution deal on future releases. Part of the consternation appears to come from the fact that, while this kind of corporate in-fighting isn't entirely uncommon, Disney hasn't done it in quite a while, even as their Marvel and Pixar movies have reliably been some of the top-grossing films every year for exhibitors.

According to the report, "Distributors tell me Disney hasn't negotiated its terms with the movie chains in several years – not even for Summer 2012′s huge tentpole The Avengers – so the studio thinks it's due for a new overall deal on future Disney titles. Those include not just Marvel sequels but also LucasFilm's new Star Wars series as well as Pixar toons. The result is that a number of circuits are refusing to put [Iron Man 3] tickets on sale until there is an accord." AMC, the largest chain participating in the protest, have an Iron Man movie marathon scheduled for the day before the film is released, culminating in a midnight screening of Iron Man 3.

Iron Man 3 Presale Tickets Not Available At Your Local Cinema? Here's Why