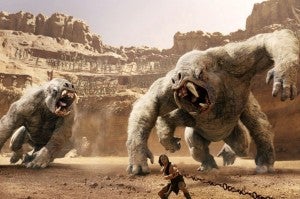 Despite reports of low audience interest and a skyrocketing budget, Disney's Andrew Stanton-directed adaptation of Edgar Rice Burroughs' John Carter of Mars (now simply John Carter) has been getting phenomenal word-of-mouth from critics and fans coming out of early screenings. How do you reconcile these two vastly different impressions of the movie? Disney thinks it's simple: Make the people who haven't seen the movie yet into the ones who have, and think it's awesome. So, they just announced via the official John Carter Twitter account that tomorrow at noon Pacific Standard Time, they'll unveil a 10-minute scene from the film on YouTube. No word on the content of the scene, but right after it launches tomorrow, we'll be here to talk about the clip and bring our readers a link to the video. John Carter opens in theaters nationwide on Friday.