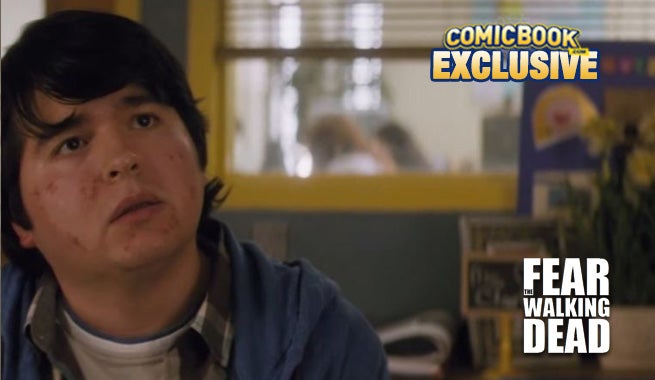 Fear The Walking Dead promises to explain what the world was like when zombies began to rule.

One young man in the series, Tobias, is a bit of a prophet. Lincoln A. Castellanos, an admittedly huge fan of The Walking Dead, portrays the teenage boy who tries to warn the world of what's to come, but before we watch the world fall apart, we wanted to catch up with Castellanos to give everybody that same warning of what's to come on Fear.

We caught up with Castellanos for an exclusive interview, to talk all things zombie apocalypse.

CB: This must be an exciting time. You're in the trailer. You're in the first two episodes, big time. Did you get to go to Comic Con over the summer?

LC: You know, I didn't have a chance to go. I was busy with my own thing. I was getting a lot of texts from people. Someone sent me a picture of the con floor where Fear The Walking Dead had its section on the floor and there was a TV and sure enough it showed me from the trailer. So, I guess I could say I was there in one form. I'm happy with that.

That's really cool. Now, what do you think people should know about Tobias going into Fear The Walking Dead? He kind of has an upper hand right out of there gate.

He does! What I can say about Tobias and some of the things people already know from other sources, he's a wise-beyond-his-years student, he's awkward but intelligent. He's an intelligent senior. He's got a lot going on for him prior to everything that happens. He knows he's smart and he tries to use it to advantage despite his social shortcomings. When he sees the reports of violence spreading through the country his paranoia kicks in and he is certain, he's sure, that something terrible is coming, so he has to protect himself in any way that he can.

For me, Tobias is also a representation of all the smart, misunderstood, different kids we come across in school and everyday life. I think people can relate to him off the bat. He's one of the ones who looks to Reddit and social media for all the answers. He's one of the ones who gets dismissed but everyone else because of how they look or what they do but thinking quickly in this show, when the apocalypse is on the verge of happening, and, in general, things move quicker, people like Tobias are the ones who are adapting the fastest. You see that he needs to give his counselor, Madison, a little more convincing, so that's what is happening when we meet him. We get a little sense of that in the trailer when he says, "Safer in numbers." Then he goes on to say, "There are reports in five states."

I think people just need to know that he's just a regular kid, no problems, but he's very smart, and he's pretty much on the nose about what he thinks is happening and he's trying to warn people, especially Madison. He's trying to warn her that the end of civilization is coming.

How does he get that information? Is it from the internet research you just mentioned or is it from witnessing something first hand? What gives him that advantage?

It was a little bit of both. Just research and things online. Things you come across when you go deep inside of the internet. You find what, on the surface, is a crazy story no one would believe except a select few or conspiracy theory type people. He's seen the reports, maybe he's seen some videos, and he's very scared. But - because of how he is as a person, socially, he's not able to communicate his fears clearly. He takes it upon himself to protect himself the only way he knows how. It kind of gets him in trouble but it also gives him an opportunity to warn Madison (Kim Dickens) before she sees it herself.

Were you a Walking Dead fan before getting cast in Fear?

Yeah! Oh, yeah! Dude, I was a fan of the comics. I started reading the comics back in 2008 when I was in college and I was acclimated with it before news came out from AMC that they were going to do the original Walking Dead. I admired the risks they took deviating from where the comics go and where the original show is now. I think there's two great different points. I'm up to date with the comics so I know exactly what's been going on there and I love The Walking Dead. I was telling my mom late last year, "It would be great to be on the show. It would be great to be on the show just because it's a character driven drama." That's what I love about the story. The show and the comics - it's all about the characters. The walkers, they're not the focus of the story. It's the people and how they come to terms with the apocalypse and how they cope with not only everyday life but everyday life with extreme changes and the world. I'm a huge fan. I'm so excited. As a fan I'm so thankful to the producers and the whole crew and the whole cast to just play along with them.

That must be such a great experience. Congratulations. What was the auditioning experience and finding out you got the role like?

The experience was unforgettable to say the least. I went in to audition on a Friday morning. Had a great read with the casting director, Wendy O'Brien. Had the audition Friday morning and got the call later that evening that I had the role. The next day, Saturday, I was doing my fitting. I was on set Monday. In about four days it went from, "Oh, I have an audition!" to "Now, I'm on set!"

As you can imagine, it was a crazy roller coaster ride that weekend. I was so excited. I've always been - this is a well respected, much loved universe. I just want to play my part in it and play my character, Tobias, in the most honest way I can because it's been always said before in the past, this is a character driven drama. It's not about the walkers or the infected or, you know, the apocalypse, it's about the people who are being affected by all of these things. I just want to create someone who is honest and truthful and someone who we can just relate to. I'm excited to do this and go forward and I'm not sure where it goes forward but if I do get the opportunity to continue to represent all these kids who are one step ahead of the adults.

So, if the zombie apocalypse really happens, who out of all of your fellow cast members is going to be the first one to go?

Oh, boy. That's a tough one, I don't want to rock any boats or anything! Based on what I've seen from, only what I've seen in trailers and clips and everything, I think Travis and Madison are gonna do just fine. I think it's Alicia who has a chance of getting overwhelmed by it. She's such an over-acheiver and she's so focused on her own things education-wise and school-wise. She's very much in her own world, rightfully so. I think that could be a problem for her when she does face these "effected" as they're gonna be called in the show. Nick knows about it. He's the first one to see it. So, I think just off of that, the way he is as a person, with his addiction and always on the run and in constant need of something to move him, I think he'll be just fine. And he's seen it but Alicia doesn't wanna believe any of that. She rolls her eyes and Madison, too, but luckily with Madison she had Tobias to, kind of, warn her. I would say, Alicia should be on the lookout.

Have you seen the first episode yet?

I have not seen the first episode yet. I am awaiting it. I've heard from the crew that it looks great and they tell me I'm really good in it, that my performance is really honest and truthful. That's what I look for in roles that I take on so I'm really thankful to be playing a character that's so grounded in honest truth and just deals with regular problems. I'm excited for people to see the show for those reasons. It's dealing with a regular, diverse, blended family. People can relate with that. Custody rights. Forming a new family. These are all real things for us to face that we're all gonna be able to relate to. So, then, on top of that you throw in the fact that they have to deal with all of the family drama and then the apocalypse happening. It's very exciting. I can't wait to see it.