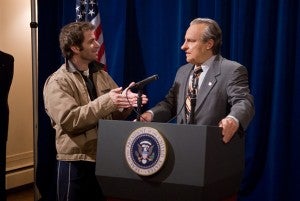 While Luke Skywalker, Princess Leia, Bail Organa, Boba Fett and even Han Solo have expressed interest (to varying degrees) in returning for Star Wars sequels set to begin in 2015, there's one big name who's not interested in making the trek to Tatooine: Man of Steel director Zack Snyder. "I don't think I'd be interested in directing it. I'm a huge Star Wars fanatic. I just think doing episodes seven, eight and nine is just a slippery slope. It's a whole other mythological experiment I'm excited to see, but it's a lot of effort," Snyder told the Los Angeles Times in an interview. While Snyder's name has come up in a handful of speculative articles on the films, that's likely just because anyone with a few huge tentpole movies under their belt will be discussed when this kind of thing rolls around.  He's been pretty loyal to Warner Brothers, where he's made 300, Watchmen, Sucker Punch and now Man of Steel, and seeing him head over to Disney at a time when a Man of Steel sequel will likely be in the works is difficult to imagine.