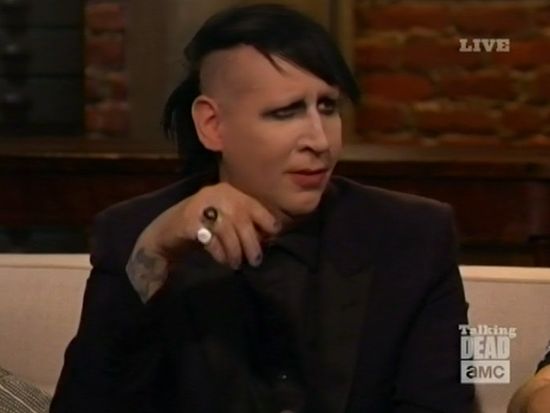 On last night's Talking Dead, Marilyn Manson created quite an uproar. Check out Comicbook.com's transcript of what Marilyn Manson said. The musician attempted to weigh in on every discussion point, offering up rambling theories that sounded bizarre and strange at first glance. Host Chris Hardwick appeared to become increasingly frustrated about Manson's constant chatter during the episode. Hardwick openly mocked Manson, specifically directed questions to other guests, and finally appeared to be just ignoring Manson. In the course of the hour long show, Manson managed to mention Jamie Lee Curtis, burning bras, menstruating, Ashton Kutcher, genital warts, John Deere tractors, Hitler, Indians, Denzel Washington, Ethan Hawke, symbolic hats, criminal ears, World War Z, and strip bars. While the rambling nature of Manson's theories, along with his interrupting nature, frustrated many viewers in addition to the host, there could actually be some rationale to the points that Manson was trying to make. We went back through Manson's more unusual observations, and we've attempted to explain what he might have been attempting to express below. Spoiler Warning: There are extensive spoilers for the "Isolation" episode of The Walking Dead included below. The Criminal Ear Theory – Marilyn Manson: "Then, you have Shane, who I like to call criminally eary, because his ear looks criminal. There's an old study about the shape of people's ears makes them criminal or not." Explanation: Manson is talking about anthropological criminology, which is a field of criminal profiling attempting to link the nature of a crime to the personality or physical appearance of the offender. 19th Century Italian Criminologist Physician Cesare Lombroso outlined 14 physiognomic characteristics which he and his followers believed to be common in all criminals. One of the criminal characteristics was large, protruding ears. Of course, Shane had large, protruding ears so Manson was actually recalling back to this old study. Carol's Dead Daughter Feeding Rats To Zombies – Marilyn Manson:  "I think it's Carol's daughter." Explanation: Probably, one of Manson's most bizarre theories, considering that Carol's daughter Sophia turned into a walker and was killed in Season 2. While host Chris Hardwick was baffled by this declaration, there is a simple explanation. Manson was likely talking about Lizzie, who essentially became Carol's adopted daughter after her father died. Lizzie has displayed sympathy for the walkers on the show, so she would be the most natural suspect to be feeding rats to the walkers. Daryl And Michonne Scissoring Each Other – Marilyn Manson: "Can I make a strong prediction? Michonne and Daryl [makes scissors coming together with his hands]." Explanation: Earlier in the episode, Manson expressed that he had previously thought that Daryl was going to sleep with Carol. But now that Carol had committed a double murder, he seemed to suggest Daryl's morals might not allow him to do this. Instead, Manson now thinks that Daryl is going to sleep with Michonne, and the scissors meeting hand gesture was Manson's representation of sex. Carol's Period Could Be Reason She Killed Karen And David – Marilyn Manson: "She's mad about all the things in her life. Maybe, she hasn't gotten laid in awhile. She could be menstruating. Who knows what's going on?" Explanation: While Manson's comments might seem pretty unusual, it's likely he was once again referring to the theories of 19th Century Italian Criminologist Physician Cesare Lombroso. Lombroso theorized that female criminality could be correlated to hormonal factors and chemical imbalances during the menstrual cycle. It's actually a theory that has surfaced from other criminologist as well and has been used in court cases. While most would not agree with the menstruation theory, Manson was likely just throwing this out to make a point that they don't know what really drove Carol's actions. Rick's Symbolic Hat - Marilyn Manson: "Him being the first character, and his hat being symbolic of him being a lawman. Like when you see a guy in a white coat you think, 'Oh, he's a doctor.' You see somebody in a fireman's outfit you think they're a fireman. He and his hat, and then when he gives it to his son, the order shifted so people are starting to make their own decisions, but they need a leader." Explanation: Manson made a couple of references to Rick's symbolic hat, which at first glance the thought of a symbolic hat just sounds funny, but Manson appears to be making a valid point. The Walking Dead does use a lot of symbolism, and Rick's hat is symbolic of a lawman and passing the hat to Carl did have special meaning. Rick Should Mow Down Walkers On A John Deere - Marilyn Manson: "Literally, like Rick's a farmer. He should have one of those John Deeres and just drive their legs off. Then, they can't walk." Explanation: There's not really a deeper explanation that we can offer here. Manson appears to want to see Rick hop on a John Deer tractor and mow down zombies on a future episode. As crazy as it might sound, we have to admit that would be kind of cool to see. Tyreese as Ehhan Hawke, Indians as Zombies, and Burning Bras as Burning Human Beings – Marilyn Manson: "She's suddenly like a feminist Sufragette City burning bras," "I thought it was a reverse of Training Day with Denzel Washington and Ethan Hawke," and "It's like when people came to America and killed all the Indians." Explanation: These all can be summed up with the same explanation. Manson likes making comparisons, which many people might find unusual. Manson is obviously a film buff, because he also referenced World War Z. While these comparisons might seem a little off-the-wall, it's Manson just talking about what different parts of The Walking Dead made him think about.