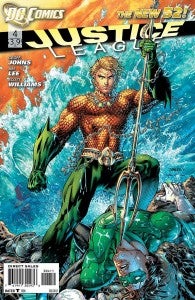 In the fourth month of DC Comics's successful New 52 initiative, Marvel Comics regained their traditional foothold on the Diamond Comics Distributors sales charts, exceeding DC in both dollars and marketshare for the month of December 2011 in spite of DC taking eight of the top ten spots in periodical sales. UPDATE: Top DC brass talked to Newsarama about this and other issues, and noted that because almost all of the New 52 books are returnable, the sales figures are artificially low and DC will likely take the month once the final numbers come in. Most experts have assumed that it would only be a matter of time before Marvel regained the top of the sales chart, given that not only are readers creatures of habit likely to return to their old trends, but Marvel tends, on a monthly basis, simply to publish a significantly larger number of comics than does DC, meaning that as long as DC isn't selling spectacularly or Marvel isn't underperforming, Marvel should take the market share. Additionally, Marvel sells many more $3.99 books than does DC, meaning that their dollar share would be higher even if both publishers sold the same overall number of comics. Marvel took 39.05% of the total market share to DC's 37.72%, and 34.43% of the dollar share to DC's 37.74%, putting the two publishers closer together than they had been for quite some time prior to the New 52 relaunch. No comic book published by any other publisher made the top ten--or even the top fifty--in monthly sales, with Image's The Walking Dead #92 taking the highest non-Big Two spot at #58 on the top 100. The Walking Dead also dominated the trade market as usual, with its fifteenth volume, We Find Ourselves, taking the top spot for the month and the first two volumes of the popular series also appearing in the top ten. Graphic novel sales overall were down double-digits from this time last year, while periodical sales rose. Sales were down substantially from November to December, but that's largely academic and not indicative of anything in the market, since there was an additional shipping week in November over December. The top periodical seller for the month was Geoff Johns's and Jim Lee's Justice League, which has been DC's top seller ever since the relaunch. It was followed, in order, by the fourth issues of Batman, Action Comics and Green Lantern before Marvel's first title--X-Sanction #1--entered the list at #5. As the opening salvo in the upcoming Avengers vs. X-Men battles for Marvel, its success probably bodes well for Marvel's linewide success in 2012. Marvel's next entry on the top ten was Defenders #1, coming in seventh (just behind Detective Comics #4), with the fourth issues of Flash, Batman: The Dark Knight and Superman rounding out the top ten. Even as their market share dropped, 43 of DC's #4 issues made the top 100.