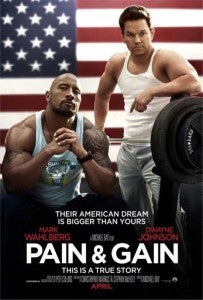 Say what you will about Michael Bay, but his new Pain & Gain trailer actually looks really good. With a number of stars, Pain & Gain would likely be a large budget blockbuster for most directors, but for Michael Bay it's a low budget film. Made on  a budget of somewhere between $20 million and $25 million, Pain & Gain stars Mark Wahlberg, Dwayne Johnson, and Athony Mackie as three bodybuilders who kidnap a rich guy. It's based on a true story. One thing that jumps out to us about the trailer is that Mark Wahlberg is very entertaining, which is a good sign for the upcoming Transformers 4 movie, where Bay will also direct Wahlberg. Pain & Gain is scheduled to be released in movie theaters on April 26, 2013.