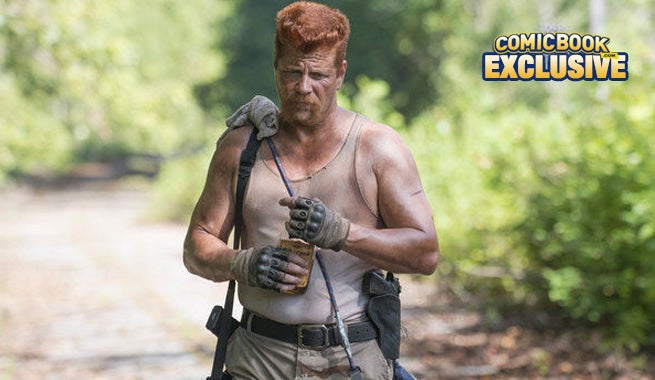 In preparation for The Walking Dead's sixth season, we had the chance to talk with Michael Cudlitz about what we can expect this Sunday night and going forward.

Cudlitz, who plays Abraham Ford on the AMC zombie thriller, is known for his abundant manliness and witty one-liners he finds somewhere way out in left field. Prior to the interview, I polled my Twitter followers to see what questions they had for Cudlitz and the number one response was, "Where did the 'Mother Dick' line come from?"

You asked and Cudlitz answered in the first question of our exclusive interview below.

CB: So, I polled Twitter on what question they wanted answered from you, and the resounding response was, "Who came up with 'Mother Dick?'"

MC: I'm gonna have to go with the writers on that one. They come up with all that great stuff. There's stuff coming this year that is gonna be very, very well received, I'm sure.

Do you think you top "Mother Dick"?

Yeah. I think so.

It looks like there are some crazy big things coming this season. In the premiere there must have been 10,000 people in zombie make-up.

People are saying that but I think the biggest day we had was 360 and 400. The rest of those are Victor, our CGI and special effects guy. It's good that you couldn't tell all the time.

Yeah, it looks really good. A lot of times on TV effects don't meet the par set by movies but I have to say, it was difficult to tell in the season 6 premiere.

I think part of that is, they know they have the screening at Madison Square Garden on this huge screen, so even more effort went into it so it looks good there. So, by the time it gets reduced down to your television screen or your computer screen that you watched it on, it probably looks f---ing amazing.

Have you watched it yet?

No. I'm supposed to see it in the next couples days. I was gonna wait to see it at Madison Square Garden and they're like, 'Oh, you guys aren't seeing it. You're gonna be backstage waiting for the panel and stuff.'

Scott Gimple said the show reinvents itself every 8 episodes. What would you say is the theme for the first half of season 6?

This is kind of an ongoing theme, but definitely, what is worth fighting for? How hard will you fight for home? And what is home?

Does that theme change drastically going into the second half of season 6?

Yes. It changes the mindset of everything we approach and everything that we're given and is brought to us. The threats are continually changing but they're the same.

Are you getting a little bit nervous about Abraham's fate with where we're getting in the show, knowing the fate of his comic book counterpart?

No. [Laughs] I was being asked the question last year around the same time. I'll stick with the same answer I tell everybody. Everybody comes here to die. I've read the comics. I know in the comcis my character has a lifespan but I also know we're not doing the comics. There are people alive in the comics that are dead on the show and people that are dead in the comics that are alive on the show. I can't really worry about any of that. Whenever that comes, it will come. I'm just enjoying my time here when I have it. I think that it makes everyone's work better. Nobody ever sits back on their ass and says, "Oh, you know, I'm gonna be on this show until it's over." I think everybody knows that the show may be over long after they are done with it so you better do your best work everyday. It's not a job where you come back and relax. You work.

It seems like every episode you guys have to push yourselves further and further. Have there been any tough goodbyes yet with filming this season?

I think all the goodbyes are tough.

It's not uncommon for certain characters to get spotlight episodes. Hershel had his, Tyrese had one, you've had one. Is there an Abraham centric episode we can expect or maybe some flashbacks?

Awesome. Do you have a favorite episode so far from season six?

It looks like you have some new cast members out there on set with Xander Berkeley and Tom Payne joining. Have they meshed well with the cast?

Yeah. That's the thing with this show. It's always been a large cast since I've been involved. We're very far removed, even from Atlanta, but we're removed from L.A. or New York or any of those things that pull you when you're doing a series in those cities. All we have are ourselves and each other so we're a very tight knit group. There's not those things pulling you away and distracting you. Mostly everybody out here is from out of town so we are a big family.

A lot of what we've seen in previews for season six is what appears to be Rick vs. Morgan with the debate of survival vs. humanity. Which side do you think Abraham would be more likely to take between those two?

I think just as a base, knee jerk reaction, Rick. But I think both of those sides are very important. I would point out that that's how our form of government works. That's how it's supposed to work. There always needs to be a check and a balance. I don't think any one person, if given all of the power is going to be successful. I think that in a lot of ways it takes the village but somebody is in charge. As long as the person who is in charge is not wielding ultimate power all the time, there is a better chance for survival and a better chance for balance. We've seen other people who have one way of living and only one way of living and don't bend, i.e. the Governor, i.e. Terminus. Those people, those communities don't last. They can fall. Everybody starts out with the best intentions. It's what you do with those intentions and what happens and changes that occur and how much you let that changes affect you. I think the more you can adapt and the more you can have other ideas, the better chance you'll have at survival.

If you were writing the show, which character would you write as a love interest for Abraham?

There's not too many choices, now that I think about it, unless you wanted to home wreck Maggie and Glenn.

Yeah, not that many available choices, at the moment. I think I'd stick with the writers at this point. They've done well. I think he definitely would be attracted to Carol. That strength. There's a strength and capability there that would mean very much to him. As well as Sasha, who is also beautiful and capable.

How was it working with The Rock on Ballers?

Fantastic. What a pleasure that man is. What a gentleman. I had a terrific time working with him in scenes. Nothing negative to say about that situation. It was a lot of fun.

Before I let you go, can you tell me what Negan looks like?

We don't know what our Negan looks like yet.

It's going to be interesting to see how they pull that off on TV.

Yeah, it is. It's like Swearengen of Deadwood except without any cursing. First off, Abraham is a character that cursed almost all the time, and that's hard enough. Now you're moving into a character which is almost completely defined by his language or at least massively defined by his language. He's only supported immediately by his actions, so I'm curios to see how they do it, as well.

You guys just make Abraham such a man on this show. So manly!

Yeah! I love it. They're doing a great job.

The Walking Dead returns Sunday at 9 PM EST on AMC.