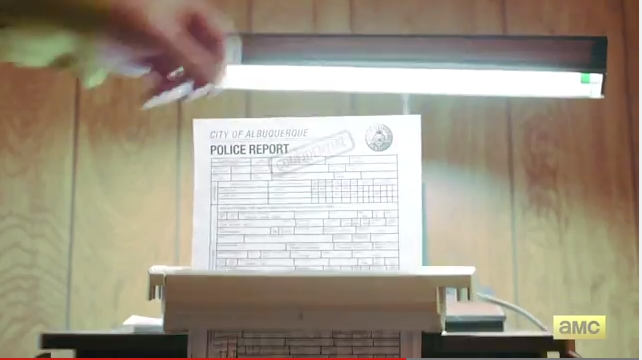 After the midseason finale of The Walking Dead, AMC viewers were treated to a new trailer for the Breaking Bad spinoff, Better Call Saul.

Whereas Saul's predecessor featured a moody theme song that became synonymous with the show, it seems that Saul will be forever linked to another sound: That of a paper shredder. In the trailer, the camera sweeps across a cluttered desk filled with broken recorders, coffee mugs and files. As the sound of a paper shredder churns away, the camera finds Saul's hand stuffing all manner of identification cards and police reports into a paper shredder. Even though the show claims to feature a Saul Goodman who's yet to grow into his merciless persona in Breaking Bad, it seems the crooked lawyer is already finding ways to bend the law.

Better Call Saul sees Bob Odenkirk return as the venerable lawyer Saul Goodman in a prequel series set years before the events of Breaking Bad. As Saul encounters different legal cases with devious aplomb, he builds his fledgling reputation as New Mexico's most vile attorney. You can check out the trailer below to see Saul's handiwork in action.