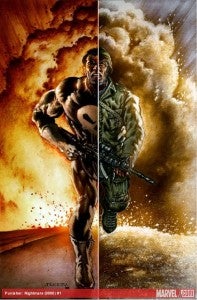 Here's a recap of the Marvel Cup of Joe panel at the New York Comic Con. Joe Quesada hosted his traditional panel, joined by Dan Buckley (publisher), Jeph Loeb (television), CB Cebulski (talent), Axel Alonso (EIC) and Stephen Wacker (senior editor). First up were the announcements: Punisher: Nightmare will be a 5 issue weekly series running through the month of January, written by Scott Gimple (AMC's Walking Dead) & Mark Texeira. Guardians of the Galaxy debuts in February 2013, from Brian Michel Bendis & Steve McNiven, edited by Stephen Wacker. Wacker mentions that there's a "person wearing Iron-Man-looking armor" on the cover, later stated to, indeed, be Iron Man. At this point, McNiven joins the panel from the audience. He's excited to work with Bendis, again, and has been redesigning some of the costumes. The character he's drawn the most is Star-Lord. The new Nova series from Loeb and Ed McGuinness was confirmed, as was its star being Sam Alexander, rather that Richard Rider (Loeb stated that he's still dead from the Thanos Imperative). Marvel is collaborating with ESPN on a 10 page comic about the Miami Heat star, LeBron James, and his drive to win four NBA championships. ESPN staffers are plotting, Christos Gage scripting and art from Greg Land, Scott Eaton, Mike Deodato & Terry Dodson. Loeb told the crowd about the Iron Man/Hulk: Heroes United direct-to-video coming out in April 2013, including a brief trailer for the crowd (showing fight scenes). The rest of the items were generated from fan questions: Quesada told the crowd that they're working on an "incredibly cool" project with Disney that should be announced in a few months. There are no NYX plans, but Alonso suggests the fan pick up Young Avengers & Avengers Arena. Cebulski indicated that the Runaways won't be around as a full team, but some characters will pop up in Avengers Arena and elsewhere. Buckley added that sometimes it takes some time to get the right pitch, but it'll happen at some point. Wacker told a fan he's fighting the fight every day for a Cloak & Dagger series. If Nova & Guardians of the Galaxy series sell 300k a piece, he'll make it happen. Amadeus Cho will have a big role in an upcoming book, which will involve him as a big reveal. They weren't willing to reveal which Ant-Man will be in the movie at this time. Quesada attributes Marvel's ability to attract Hollywood talent to Kevin Smith making it cool when he did his Marvel Knight Daredevil run. McNiven is redesigning many of the Guardians of the Galaxy cast, including Star-Lord. He'll not have his old helmet and he won't be wearing it that often, as McNiven feels it hurts his ability to have the characters act on the page. When asked about Richard Rider ever returning, Loeb said anything is possible, but nothing is planned and it was a conscious effort to respect the story that came before them. Loeb shared that one of their goals is to make the cosmic characters more tied to the rest of the Marvel U, so they don't seem stuck off on their own. Wacker shared that Dan Slott had already confirmed that Superior Spider-Man #1 will have a new Spider-Man as its star. Wacker, also, shared that Peter googling Miles will be picked up at some point and that there's an all-new Sinister Six in Superior Spider-Man, as well. Quick hits from the fans: From AvX: there was always talk about killing Cyclops. Da Vinci & Tesla from SHIELD will be back at some point. They're working to improve the Augmented Reality app. When asked if Iron Man had ulterior motives for being in both Avengers & New Avengers, Buckly responded with "read the book".