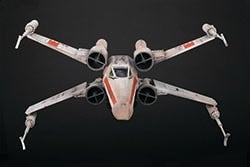 A rejected Yoda head created by Industrial Light and Magic will be among the Star Wars-related items up for auction in next weekend's "Drama, Action, Romance: The Hollywood Auction" from Profiles in History. Other items include a miniature X-Wing from Star Wars and Luke Skywalker's stunt lightsaber from Return of the Jedi. The timing, of course, couldn't be better, since Star Wars enthusiasm is riding as high as it has been in years following the recent announcement that Lucasfilm has been bought out by the Walt Disney Company and that there are more Star Wars films coming in the immediate future. Check below for the full run-down from the auction house:

An original screen-used X-Wing Fighter filming miniature from Star Wars: Episode IV – A New Hope. This amazing filming X-Wing Fighter miniature measures approx. 22 in. long x 18 in. wide. Exceedingly rare, this is the only painted and finished X-Wing Fighter that Profiles in History has encountered from the original 1977 Star Wars film. It is pictured above and expected to fetch $80,000 - $120,000. 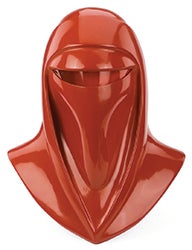 An Imperial Royal Guard production-made helmet from Star Wars: Episode VI- Return of the Jedi. When the dark Emperor Palpatine arrives to confer with Darth Vader on timely topics such as Death Star II completion, and patience concerning the Luke Skywalker "problem," he spares no expense in ceremony with his cordon of crimson-clad Imperial Royal Guards, mysteriously obscured inside highly stylized and streamlined helmets such as this beautiful production-made example, obtained directly from the production team at ILM. It is pictured below and expected to fetch $40,000 - $60,000. Luke Skywalker's stunt lightsaber from Star Wars: Episode VI- Return of the Jedi. This is Luke Skywalker's weapon of choice during the epic final battle for his soul and the fate of the galaxy against Darth Vader and the Emperor aboard the Empire's planet-destroying Death Star. This lightsaber was obtained from the estate of "Star Wars" model-maker Wesley Seeds, who worked on Return of the Jedi. It is expected to fetch $30,000 - $50,000. A production made, Rebel Alliance pilot helmet from Star Wars: Episode V - The Empire Strikes Back. This production helmet was restored to hero finish and decoration and remains a handsome tribute to a rare artifact from the original trilogy. It is expected to fetch $20,000 - $30,000. A screen used Scout Trooper Blaster with production made holster from Star Wars: Episode VI- Return of the Jedi. First appearing in Return of the Jedi, Scout Troopers are seen on Endor, battling Luke and Leia on speeder bikes, and this is where we get our best look at this special small blaster and holster created just for Scout Troopers' bulky gloved hands. This comes directly from an ILM effects production team and is expected to fetch $10,000 - $15,000. A rejected Yoda head made for production by Industrial Light & Magic. This is a piece of Star Wars history. Consisting of a "Yoda" head or "skin" of the sort that was affixed over internal animatronic mechanisms, eyes and teeth for animating this beloved character. Created to rebuild the original Yoda for George Lucas, it was rejected due to minor bubbles in the face. It is expected to fetch $4,000 - $6,000.

Original Star Wars Props Up For Auction Next Week