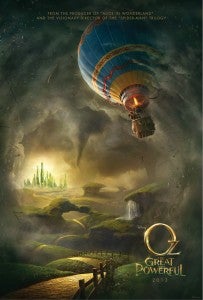 Walt Disney Pictures made a new poster for Oz the Great and Powerful available earlier today. The Wizard of Oz prequel, based on a novel by L. Frank Baum and starring James Franco and Michelle Williams, will be in theaters on March 8, 2013. It's directed by Sam Raimi of the Spider-Man and Evil Dead trilogies and revolves around a two-bit con-artist who is shunted away to Oz. At first, the simple way of life and plentiful bounties of the place make it seem as though he's on easy street, but it's not long before he meets a trio of witches who believe him to be a wizard foreseen in prophecy; their faith in him drives him to try and make it so.