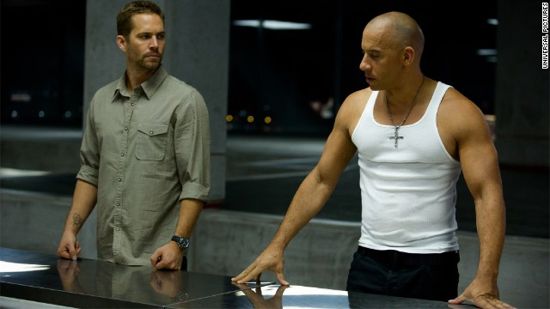 One of the most touching moments of the 2014 MTV Movie Awards was a tribute to the late Paul Walker. MTV has not released the footage from the tribute online. If they do, then we will add the footage to this article. Below is a transcript of what was said. Walker's Fast & Furious co-star Jordana Brewster started off the tribute. Brewster said, "This past November, tragedy struck when Paul Walker's life shockingly ended. The immense outpouring of grief around the world was a reflection of the kind of man Paul was. He was so, so special. I was lucky enough to work with him over the last 15 years and witness the generosity of his heart every day I was with him. He was humble. He thought about others. Whether you knew Paul for five minutes or a close friend, he made you feel like the most important person in the world. For Paul, every day was an adventure to be tackled, and he wanted to make a difference in this world. Whether he was tagging great white sharks for research or helping victims of natural disasters through his organization Reach Out Worldwide, Paul's kindness was pure. He never asked for credit or glory. He was just a really good guy. His charm, wit, spirit and his beautiful smile will live on because he will always be in our hearts, and he will remain an inspiration to live life to the fullest." After Brewster's opening remarks, Vin Diesel remembered his friend. Vin Diesel said, "I'm always going to be here for you even when you tell me to go. That's who Paul Walker was. The world saw his magic on screen. The world saw his philanthropic endeavors. Yet, I wish the world could have seen how special a brother he was." Between Vin Diesel's words, scenes played from Paul Walker's movies. There was also a quote from Paul Walker shared on the screen. "When you put good will out there it's amazing what can be accomplished." – Paul Walker Update: Video of the tribute has now been added below.