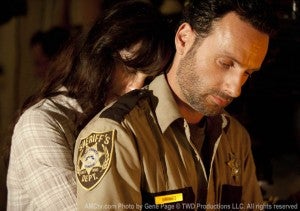 AMC has posted a two-minute video preview of tomorrow's episode of The Walking Dead, titled "Cherokee Rose." While MTV's Splash Page suggests that Daryl Dixon and his search for the missing Sophia is actually the focus of the week, this particular clip centers around Shane, who recounts a somewhat historically inaccurate account of Otis's last moments for the benefit of those gathered to mourn the character (who died in last week's episode after being stripped of his weapon and provisions by a desperate Shane). The Walking Dead airs tomorrow (Sunday) night at 9 p.m., followed at midnight by an all-new episode of AMC's Talking Dead (a discussion show about the series).

The Good Life Review: A Life of Hardships