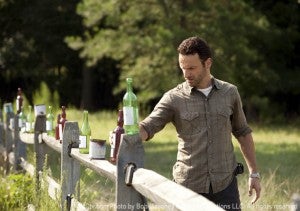 Over at AMC's Walking Dead website, the network have posted a one-minute previewof this weekend's upcoming episode, titled "Secrets." While Andrea works on her shooting with Shane, the sexual tension and potential for romance built up between the pair over the first several episodes of the new season appear to go up in smoke when Shane's growing instability and survival-über alles attitude looks ready to drive a wedge between them. Catch "Secrets" Sunday night at 9 p.m. EST/8 p.m. CST, with an episode of the network's call-in discussion show Talking Dead later that night.

Dragon Ball Z Cosplay Gets Into Fighting Form With Videl