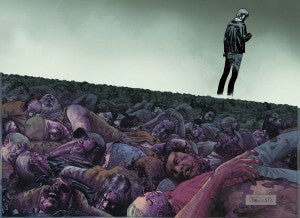 As almost anyone even tangentially aware of comics knows by now, The Walking Dead, Robert Kirkman's zombie survival epic from Image/Skybound Comics, hit its milestone one hundredth issue today. The issue, which is widely expected to be July's best-selling single-issue comic book, had been teased as a game-changer and a can't-miss issue. Neither is true. As a longtime reader of The Walking Dead, I can say with some confidence that few comics--especially in the pop horror genre--managed to keep from jumping the shark as long as this one did. I've often praised Kirkman's bold storytelling moves and the feeling that, at any given moment, anything could happen in the long-running, creator-owned title. That "no one is safe" has always been a defining characteristic of the series, and a tragic turn for the cast here or there to shake up the status quo and make the world feel more dangerous and brutal is something that has kept the book feeling fresh and relevant. This issue, though, is the first time it's felt forced. It's the hundredth issue of a brutal and shocking series, and it feels as though Kirkman felt obliged to do something brutal and shocking, not in service of the story but in service of The Walking Dead's reputation and the conversation it would generate. As a character is gleefully and gruesomely dispatched, it feels a bit as though Kirkman and artist Charlie Adlard are simply readying the status quo to synch up with the TV series, in which The Governor will soon be appearing. This issue sets up a character who is clearly his heir apparent as the most heinous and despicable character in the world of The Walking Dead, one who you can't wait to see die but who Kirkman will likely leave on the table for a while longer, given the story mileage he got out of The Governor posthumously when he realized that maybe he hadn't said everything about the character that there was to say before he dispatched him. Perhaps as bad as the fact that the "game-changing event" seems so gratuitous and awful is the fact that it's frankly not that much of a game-changer. Explaining why that is would lead into some pretty spoiler-heavy territory in and of itself, but the story's direction has really only changed for one or two characters, with most of the survivors no worse off in some ways than they were last month. It feels like an artificial creation, tacky and ugly and calculated and commercial and all the things that you hope a creator-owned comic book won't be.