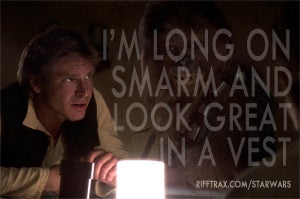 Rifftrax, made up of repurposed parts from the cult sensation Mystery Science Theater 3000, is pretty well-known for making fun of bad movies. One of the ways to make money on a business model like that, though, has been to make fun of good movies, too, in recent years, releasing commentary tracks for some of the most beloved AND most reviled movies in cinema history to broaden their appeal beyond just the same group of fans who watched MST3K on cable back in the day. For that reason, they've made a number of Star Wars commentary tracks, as well--audio files you can play while watching the movie to enliven the experience a bit with the comedic work of Mike Nelson, Kevin Murphy and company. They've not only done commentary tracks for all six of the feature films, but also for the shudder-inducing Star Wars Holiday Special, which you'll have to find online because George Lucas has done his best to make sure it's never shown up on home video. And, because of the Disney-Lucasfilm merger and concurrent announcement of Star Wars Episode VII, they're selling them all at a discount right now. Check out the comments from Rifftrax, complete with links to purchase, below.

You might have heard that George Lucas sold his company Lucasfilm to Disney, and if not, it's probably because you live on Fyodos! (We're not really sure what that joke means, but we've been assured the Star Wars fans in our audience would understand.) To "celebrate" this great sale of one modern filmmaking company to the One With Mouse Ears, we're holding a sale of our own! For a very limited time only, each of our Star Wars riffs has had $1 taken off the price. But hurry, this sale will end before you can say "Now that's what I call podracing!"