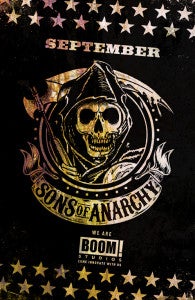 This September, Boom! Studios will up their licensed properties game with a comic based on the hit FX series Sons of Anarchy, the publisher announced today via a "visual press release" seen at left. No further information was available about the comic at this time. The series stars Hellboy's Ron Perlman, and showrunner/creator Kurt Sutter will be headed to Comic-Con as part of Fox Television's presentation this year, along with the cast of How I Met Your Mother and geek favorite David Boreanaz from Bones. Expect more soon, as Boom! should be releasing their solicitation text for September product soon.