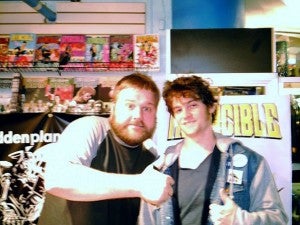 These questions originally ran as part of an interview I did with Robert Kirkman, visionary creator of The Walking Dead, in 2009. I've removed the issue-specific questions and left the ones that talk more about the over-arching themes of the series, even one about Maggie which may seem dated if it didn't play so well into this week's episode of the show. In the spirit of my evening of trick-or-treating through the archives to find great Halloween content for our readers, we present this interview. ComicBook.com: It's funny--much has been made of how credible your non-zombie threats are in The Walking Dead. Do you ever catch flak from zombie fans who feel like issues that actually focus on the living dead are few and far between? There are long stretches of time where you don't worry about a zombie attack for more than a page or two! Robert Kirkman: Yeah, in the early days I heard a few complaints that there weren't enough zombies in the book. I recently went a year--two entire trade paperbacks' worth of issues--without them killing any characters from the book (issues 49-60/Volumes 9 & 10) and thus far, nobody has noticed. Eventually I foresee being able to go an entire block of issues without a zombie appearing. I think it's important to the book that they're not the focus. If it makes sense for them to appear--like currently in the series, they'll be there...but if it ever doesn't, I'm not going to shoehorn them in just to have them there. ComicBook.com: Whatever happens, Rick seems to step back into the role of "leader," whether he wants to or not. RK: It's something he can't really control. We've seen since the tragic events of issue 48 that he very much doesn't want the responsibility of calling the shots...any of them, but he just can't control who he is. ComicBook.com: There's something a little eerie about how easily Carl takes to all of this--is his mental health a long-term story? I thought for a while it was going to be something that developed quickly. RK: I prefer to think of it as changes he's been going through for the entire length of the series--but it's things we're just now noticing, or being shown. Carl has certainly grown up fast, whether that's a good thing, or a bad thing...remains to be seen. ComicBook.com: Speaking of mental health--even if she isn't a threat to herself anymore, does Maggie's new outlook put her in a position to be a threat to others? Loss of faith is a powerful thing...! RK: There's a lot more to Maggie, as we'll be seeing very soon in future issues. ComicBook.com: How long can we reasonably expect to see Morgan around? He seems to be having a really hard time keeping up with everyone. Or am I looking too deeply and this is just an attempt to honestly depict that not everyone would be up to Rick's level of zombie evasion skills after only a year or so? RK: Maybe reading into things a bit. Morgan's not a runner...hasn't really strayed from his house very much. He could be around for years--or he could die next issue...I'll never tell. ComicBook.com: What is it about Morgan that Dale finds "crazy?" After only about three seconds with the guy, to come to that conclusion makes me wonder if--even in this brave new, zombie-filled world--maybe race plays a part. RK: Morgan looks crazy. He's wearing dirty clothes, he has wild hair...he looks like a homeless person. The idea is that he let himself go after his son died...sort of became a wild man. It has nothing to do with race. CR: What was it that made Dale suddenly do a 180 and "rebel" against Rick? That was unexpected for a lot of readers. RK: Dale has had a lot of good ideas that have been ignored or steam-rolled over by Rick. That would get to anyone eventually. He hasn't snapped so much as he just can't ignore how much trouble Rick's been causing lately. We'll see where things go with that.

Bullet Train To Win Second Weekend at the Box Office