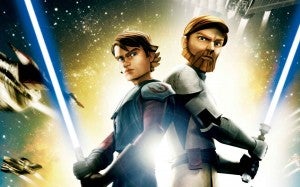 Following the disappointment that most hardcore Star Wars fans at the prequel trilogy, one of the few things Lucasfilm has done in recent years that's drawn more praise than criticism has been Star Wars: Clone Wars, the Cartoon Network series that's been running for the last five years. That show will continue following the acquisition of Lucasfilm by the Walt Disney Company, but will reportedly leave the Cartoon Network after the current licensing agreement ends, says The Hollywood Reporter. That agreement reportedly has been on a one-year term for a while now and, while Lucasfilm and Time Warner (who own Cartoon Network) have renewed it each time, the chances of Disney doing so again are slim. In fact, during Tuesday's investor conference call to officially announce the acquisition, Disney CEO Robert Iger specifically suggested that Disney XD would be a good fit for Star Wars programming. The Disney-owned cable network currently screens series like Ultimate Spider-Man and will soon carry new series featuring The Avengers, The Incredible Hulk and more, making it arguably Cartoon Network's biggest competitor in terms of creating original animation aimed at young boys. The young boys demographic is one of the things that Disney used to justify their purchases both of Lucasfilm, and earlier of Marvel, so it's clear that's by design. According to THR, Cartoon Network will retain rerun rights to the episodes they've already run, but it's unclear for how long. Since Star Wars: Clone Wars is one of their highest-rated shows, it would be tempting to air those, but it might also be considered promotion for a competing network, so those may disappear (or very nearly disappear) for a while if the split is acrimonious with Lucasfilm.