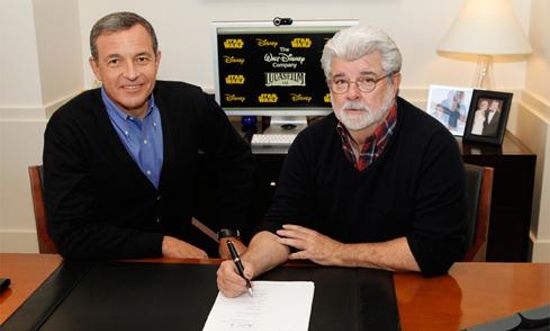 Wow, the summer of 2015 just might be the biggest summer in the history of filmmaking. Already confirmed for a May 1, 2015 release date is Avengers 2 from Marvel Studios. Rumored to also be in the mix for summer 2015 is the first ever Justice League movie from Warner Bros. Now, add some Star Wars to the mix, and moviegoers can look forward to three huge blockbusters. In a press release, announcing that Disney would be acquiring Lucasfilm LTD for $4.05 billion, Disney also revealed that Star Wars Episode 7 was targeted for a 2015 release date. While Disney didn't specify exactly when Star Wars Episode 7 would be released in 2015, it's a good bet that it will be in the summer. All the previous Star Wars movies have been released in the month of May. Of course with Avengers 2 already schedule for a May 2015 release date, Disney might push Star Wars Episode 7 back until a little later in the summer to not take away from Avengers 2 box office. According to Disney, Ms. Kathleen Kennedy will serve as executive producer on new Star Wars feature films, with George Lucas serving as creative consultant. In addition to Star Wars Episode 7, Disney announced that Star Wars Episode 8 and Star Wars Episode 9 were also in the works. Disney Chairman and CEO Robert A. Iger said, "Our long term plan is to release a new Star Wars feature film every two to three years."

Star Wars Episode 7 To Be Released In 2015, New Episodes Every Two To Three Years