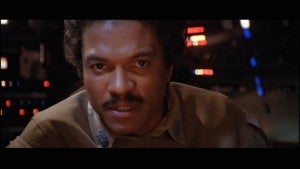 One of the most persistent rumors that's been dogging Star Wars Episode VII is that the film will kick off a third trilogy centered on the Skywalker family, and more specifically that Luke Skywalker, Leia Organa and Han Solo would likely remain at the heart of this series as they were the original trilogy. That is, according to a number of sources, what George Lucas's loose outlines for Star Wars Episodes VII through IX do. But according to screenwriter Lawrence Kasdan, who tackled The Empire Strikes Back, Return of the Jedi and has been brought in to work on one of the next three films, that wasn't always the plan. A 1983 television news feature revolving around the release of Return of the Jedi has surfaced, in which Kasdan seems to say that the film would mark the end of the road for Luke Skywalker. "What needs to be resolved in Jedi is Luke's story, his relationship with Darth Vader and his destiny," says the writer in the interview, located by Collider and embedded below. Of course, it's been years and almost nobody could have guessed in the early '80s that Star Wars would be described by Disney in 2012 as one of the most valuable entertainment properties of all time. A big part of the value of the intellectual property is arguably tied up in the iconic characters who populate the world of the original trilogy. And, just for fun, stick around in the video to see Harrison Ford talk about his relief at never having to be Han again. "Three is enough for me," said the actor, who is rumored to be returning for Star Wars Episode VII. "I was glad to see that costume for the last time."