Since the Star Wars sequels were announced at the same time as the Disney-Lucasfilm merger, the Internet has been abuzz about who might be involved. Now that we've had a little time to process the information and some frontrunners have begun to emerge--either by "rumor has it they're involved" or just by fan response, that curiousity is seeping out of the fandom and into the entertainment media, and it seems like every time a director has left his house this week, there's been a reporter waiting to ask whether he's taking on Star Wars Episode VII. The result is that, in addition to Matthew Vaughn and Steven Spielberg being confirmed as "not it," a trio of hot directors have  chimed in, with some surprising results. For those fans particularly fond of lens flares, for example, there's some bad news: J.J. Abrams probably won't be the director, in spite of being a member of Disney's reported short list, which also included Spielberg and The Incredibles director Brad Bird. "Look, Star Wars is one of my favorite movies of all time," Abrams told Hollywood Life. "I frankly feel that – I almost feel that, in a weird way, the opportunity for whomever it is to direct that movie, it comes with the burden of being that kind of iconic movie and series. I was never a big Star Trek fan growing up, so for me, working on Star Trek didn't have any of that, you know, almost fatal sacrilege, and so, I am looking forward more then anyone to the next iterations of Star Wars, but I believe I will be going as a paying moviegoer!" That attitude, of course, puts him solidly in the camp with Man of Steel director Zack Snyder, who similarly said he loved Star Wars but wasn't sure how he would approach the sequels and was unlikely to do one. Lucasfilm and Disney, for their part, have been actively seeking out people who have that kind of love for the material, so those two might be disappointing misses for the studio. Indie film icon Quentin Tarantino, meanwhile, isn't nearly as charitable in discussing the films. He took aim at Disney when asked about the sequels by Entertainment Weekly, saying "I could so care less…Especially if Disney's going to do it. I'm not interested in the Simon West version of Star Wars." West is the director of Con Air and Lara Croft: Tomb Raider whose recent credits include remakes of When a Stranger Calls and Heat. He's also directed the pilots of Human Target for Fox and The Cape for NBC, and this summer's Lionsgate hit The Expendables 2. 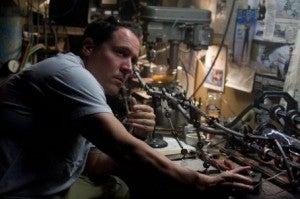 Probably the most surprising answer so far comes from that same Hollywood Life article, in which they caught up with Iron Man and Iron Man II director Jon Favreau. Apparently he's still working on features even while executive producing Revolution for NBC, because he expressed that he wouldn't reject the idea of directing Star Wars out of hand. "I think both J.J. [Abrams] and I come from a generation of people who formed our whole creative persona around what we experienced as kids from watching those films," Favreau said. "And I have had the good fortune of working with George [Lucas] and around George, and whether it is doing a voice on Clone Wars, or being at the Skywalker Ranch mixing Iron Man – so I have been very happy and lucky to just experience the culture that Lucas has created, both in my own life growing up as a kid and professional – whether it was interviewing him at film festivals on stage, he is just a really wonderful, talented gifted guy who has changed the business so much, so I am just giddy, first and foremost as a fan, to see what happens with it. I think there is a lot of question marks of how they are going to do it, and who they are going to do it with, and what the story is going to be about; but to say that I am not excited about it is definitely an understatement. We'll see." Of course, Favreau has a pretty good relationship with Disney himself; in spite of the fact that his split with the Iron Man franchise was at first rumored to be about money, he has remained attached to that and other Marvel films as an executive producer, and will reprise his role as Happy Hogan in the film. Well, for one more go-'round, anyway.