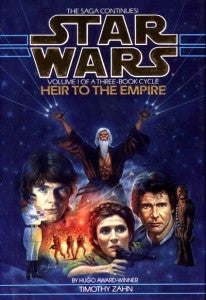 Almost immediately after the announcement came that Disney had purchased Lucasfilm on Tuesday, and that there would be a new trilogy of Star Wars films being released under the Disney banner, fans of Star Wars's "expanded universe" began speculating that the new films would be based on the Thrawn Trilogy. The Thrawn Trilogy is made up of three novels by Hugo Award-winning author Timothy Zahn, who picked up the adventures fo the principal Star Wars cast five years after the end of Return of the Jedi. When a representative for Lucasfilm later dashed those rumors, saying that the films would be composed of entirely original stories and not draw their central plot from any of the Expanded Universe books, many in the fan community were disappointed and some wondered how the creators involved with the Expanded Universe would react. "The books were always just the books," Zahn told Entertainment Weekly. "The original idea as I understood it— and Lucas changes his mind off and on, so it may not be what he's thinking right now – but it was going to be three generations. You'd have the original trilogy, then go back to Luke's father and find out what happened to him [in the prequels], and if there was another 7th, 8th, or 9th film, it would be Luke's children. The Thrawn Trilogy really would have fit into the gap." The author, who said that elements of his work have been incorporated into the trilogy of prequels that began in 1999, says that he hopes that sensibility will continue on with the new movies. "It could be an entirely new storyline, but if he picks and chooses bits and pieces from the expanded universe, we'd all be thrilled to death," Zahn said.