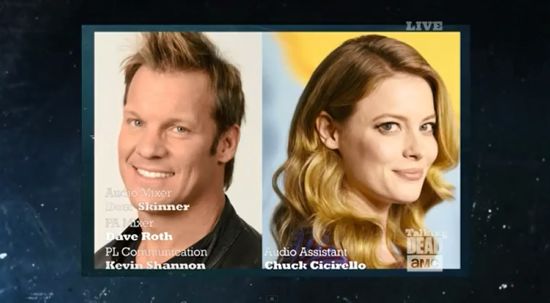 After tonight's "Indifference" episode of The Walking Dead, there is an hour long Talking Dead. Chris Hardwick is the host of the Talking Dead. Last week's Talking Dead proved to be the most unusual episode ever of the show with Marilyn Manson rambling on about his various Walking Dead theories. On tonight's episode of Talking Dead, the celebrity guests are wrestler Chris Jericho and actress Gillian Jacobs. Chris Jericho is best known for his work with World Wrestling Entertainment. He has won 30 championships between WWF/E, WCW, and ECW. Gillian Jacobs is best known for her role as Britta Perry on the NBC comedy series Community. Usually, The Talking Dead also features a guest from The Walking Dead show, but none have been announced for this week. The previous two weeks have featured producer guests, so it's possible that this week could feature an actor guest. Sometimes the Talking Dead doesn't announce actor guests in advance so as to avoid spoiling if they might have met their demise on the most recent episode. The Talking Dead airs on Sunday, November 3, 2013 at 10 PM ET on AMC.