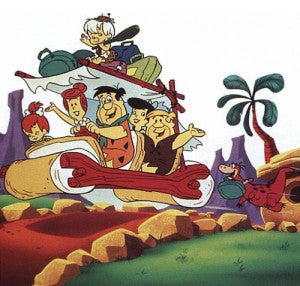 Yabba-dabba dropkick! Fred Flintstone and the gang will be returning in 2015, with a high-production-value , direct-to-video feature film. Vince McMahon, John Cena, CM Punk and other stars on WWE's talent roster will reportedly star as themselves – albeit with Flintston-ized names like Vince McMagma, John Cenastone, CM Punkrock – as Fred, Barney and friends attend the first WWE main event, according to Variety. One has to wonder whether it will still be WWE that far in the past, or WWF (as would be more historically plausible), or something decidedly more Flintstone-inspired altogether. "Warner Bros. is thrilled to continue our partnership with WWE Studios as we begin production of the latest 'Flintstones' animated feature," said Jeff Brown, executive VP and general manager, TV, Warner Home Video. "Our recent production collaborations have proven successful and we have the utmost confidence that the latest tag team between the WWE Superstars and The Flintstones will deliver the same results." The property is not averse to unexpected crossovers; in addition to guest stars on the TV version, they famously crossed over with the futuristic cartoon franchise they inspired in the '80s feature-length animated film The Jetsons Meet the Flintstones. That film was recently distributed on DVD by the Warner Archive, Warner Home Video's specialty arm. An attempt to return The Flintstones to TV failed last year after Family Guy and Ted creator Seth MacFarlane couldn't get network executives behind a reinvented version of the classic animated series. Besides the original run, the series has come back for limited or ongoing runs a number of times and spawned a number of animated feature films and even two live-action versions.

The Flintstones To Return in WWE-Themed Movie

Star Wars: Original Obi-Wan Plans Were for a Movie Trilogy