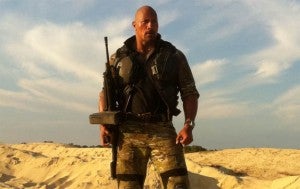 Shazam! Dwayne "The Rock" Johnson, once rumored to be in talks to play Black Adam in the ill-fated Captain Marvel/Shazam feature film from Warner Brothers, has signed on to star in movies based on not one, but two smaller, less-well-known comic books. The G.I. Joe: Retaliation star and former WWE wrestler has signed on to play the title role in Brett Ratner's Hercules, based not on the Marvel Comics character (or the Image Comics version who appears in Savage Dragon, even) but a decidedly more mythological take as presented in Steven Moore's Hercules: The Thracian Wars. Production on the film will reportedly begin in October, according to a report at The Flick Cast. Johnson is also attached to Ciudad, a thriller based on an as-yet-unreleased Oni Press graphic novel by former Green Arrow artist Ande Parks with Joe and Anthony Russo, a screenwriting duo who have worked in both feature films and television, notably on the fan- and critical-favorite two-part Community finale, A Fistful of Paintballs/For a Few Paintballs More. Following on the heels of Archaia's Bolivar, Ciudad becomes the second graphic novel this week to be greenlit for a film adaptation before the comic itself ever hit the stands. Oni Press, despite being a fairly small publisher, has a pretty strong relationship with Hollywood. Greg Rucka's Whiteout, published through Oni, became a feature film as well as its popular Scott Pilgrim series of graphic novels. Oni has also published tie-in comics based on Kevin Smith's View Askew universe and its Jay & Silent Bob/Bluntman & Chronic characters. At one point, the publisher announced that it would begin publishing a monthly comic book based on the then-popular NBC sitcom My Name is Earl, but the project never developed.