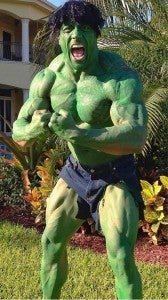 In an interview with Cinema Blend about G.I. Joe: Retaliation, Dwayne "The Rock" Johnson gave some updates on superhero movies that he's been rumored to be involved with. While The Rock had previously confirmed being up for the title role in Lobo, it looks like that movie is not going to happen. The Rock said, "It kind of came and went. It came – I thought it was interesting – and then it kind of went away?" Of course, the role that many fans have thought would be ideal for The Rock would be the villain role of Black Adam in a Shazam movie, but it doesn't look like that is anywhere close to happening either. The Rock said, "Shazam was more interesting. And really interesting to me. I would have loved that, especially the idea of playing Black Adam." The Rock also added, "Again, though, studios start to look at other properties and other superhero properties, what makes sense and what doesn't, but I'll be a superhero down the line." Interesting, The Rock sounds pretty definite about a superhero role being in the cards for him. With Warner Bros. shelving Lobo and Shazam, could The Rock be talking to Marvel Studios? He did after all dress as the Hulk for Halloween. What superhero would you like to see The Rock play?

The Rock Will Play A Superhero, But Lobo And Shazam Are Out