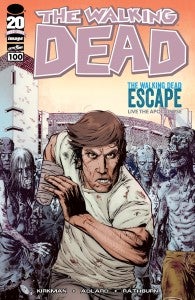 According to a press release from Image Comics, Robert Kirkman and Charlie Adlard's The Walking Dead #100 sold out of its entire print run--more than 375,000 copies--on the same day it was released Wednesday. The issue's initial order of 383,612 "This is a remarkable achievement," said Image Comics Publisher Eric Stephenson. "It's extremely uncommon, if not flat-out rare, for a comic book to see a sustained increase in sales following its first issue, but The Walking Dead steadily climbed up and up since its launch in 2003, and we couldn't be more proud of Robert, Charlie and the whole Walking Dead team." While it's incredibly rare for a non-Big Two book to top the sales chart, the last book to sell more copies than The Walking Dead #100 was also an Image title--Top Cow's The Darkness #11, way back in 1997. Robert Kirkman, who writes the series, joined Image Comics as a partner in 2008, making him the first person to become one who wasn't one of the seven company founders. The Walking Dead #100 did it with 13 variant covers, of course, the kind of gimmick that almost no other indie book is ever going to get--but it's the kind of thing that, along with the support of a massively successful television show and a best-selling video game franchise, created a perfect opportunity for a major coup from Image. "The Walking Dead continues to greatly exceed all my expectations in all forms," said Robert Kirkman. "I am especially excited for what this means for comics as an industry, that this is an independent comic hitting that number." Kirkman continued, "The future of comics couldn't be brighter as more and more readers are embracing new ideas in a big way."

Report: Surging Demand And Supply-Chain Problems Could Lead To Toy Shortage During Holidays