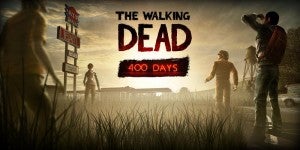 Telltale Games today debuted a trailer for their follow-up to the best-selling and award winning The Walking Dead video game from last year. You can see it embedded below. Titled The Walking Dead: 400 Days, the game chronicles the horrific aftermath of the undead outbreak through the eyes of five new characters as they struggle to survive the first 400 days of the apocalypse. Playable in any order, the five connected short stories are centered in and around a Georgia truck stop, where players will be thrust into horrifying situations that will test their morals and control the flow of the story through their decisions and actions. "After the incredible response to the first season of The Walking Dead, we wanted to surprise fans with something that offers a new angle on the world they love that's connected to Season One and the upcoming Season Two through the choices that they make," said Dan Connors, Co-Founder and CEO of Telltale Games. "400 Days is a great piece of connective tissue for fans to sink their teeth into and we're thrilled that it's to be included on PlayStation Vita as part of Season One." As previously reported, the game will sync in new and unexpected ways with the first Telltale Walking Dead game, but that also means users will have to have at least the first episode of The Walking Dead "season one" installed to play this game. The Walking Dead is rated 'M' (Mature) for Blood and Gore, Intense Violence, Sexual Themes and Strong Language by the ESRB.