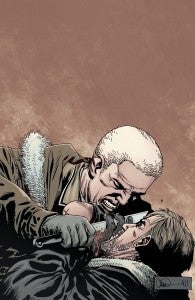 According to a press release from Image Comics, Robert Kirkman's best-selling Skybound title The Walking Dead will feature a preview of Rachel Rising, Terry Moore's new creator-owned horror title, when issue #95 hits the stands on March 28. The Walking Dead has become a popular launching pad for creator-owned material since early 2009, when John Layman and Rob Guillory's hit Image series Chew was previewed in The Walking Dead #63. Chew has gone on to be one of the biggest success stories at Image in recent memory and The Walking Dead has since previewed other books that Kirkman has deemed worth of the attention. "Terry is a personal hero of mine dating back to my self-publishing days," Kirkman writes in his introduction to the preview, according to the press release. "I've always been a fan of his work and an admirer of everything he's been able to accomplish independently." The pages contained in The Walking Dead #95 are introductory story pages that serve to introduce new readers to the world of Rachel Rising and function as a primer for the series' first collected edition, Rachel Rising: The Shadow of Death, which hits stands that same day. The trade paperback collects Rachel Rising #1-6, which recently became the first creator-owned books by Moore ever to be featured on ComiXology, including a same-day digital release for #6.

The Walking Dead #95 will feature a preview of Rachel Rising