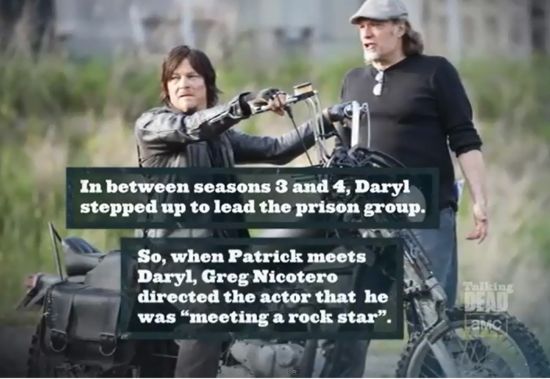 During The Walking Dead Season 4 Premiere, it was obvious that Daryl was taking more of a leadership role in the group. Daryl was part of the governing council, and the other people at the prison  seemed to look up to him. But has Daryl replaced Rick as the main leader of the group? In the "30 Days Without An Accident" episode, Carol seemed to hint as much. When everyone was eating the food that Daryl brought in, Carol said, "Just so you know, I liked you first." Daryl seemed to be a little uncomfortable with the praise, and he insisted, "Stop, you know Rick brought in a lot of them too." But Carol responded, "Not recently." When Patrick walked up, he thanked Mr. Dixon for bringing the deer back yesterday, and he asked to shake Daryl's hand. While the episode itself might have left it a little up in the air as to who was the top man at The Walking Dead camp, the Talking Dead confirmed that Daryl is indeed the new leader of the group. A graphic shown during the Talking Dead read, "In between seasons 3 and 4, Daryl stepped up to lead the prison group. So, when Patrick meets Daryl, Greg Nicotero directed the actor that he was 'meeting a rock star.'" Will Daryl's new leadership position last through Season 4? Or do you think Rick will reemerge as the group's leader?