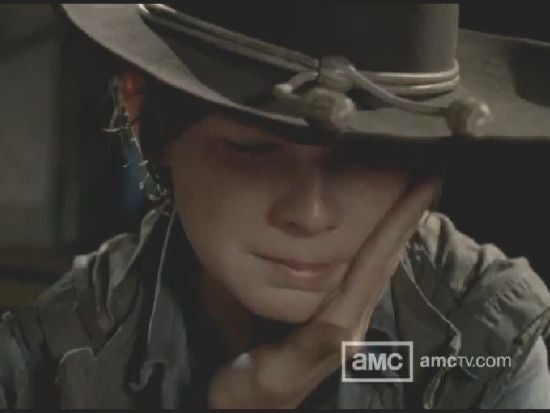 AMC has released Inside Episode 304 and The Making of Episode 304 videos, which reveal some surprising insights into what the characters were thinking during the episode. When Glenn told Rick Grimes that the gate had been cut open to let the Walkers in, Rick immediately turned to look at the prisoners. It turns out that Rick was actually contemplating killing the two remaining prisoners. Andrew Lincoln, who plays Rick Grimes, said, "When we find out that it's the gate that's been opened, instantly I go it's them. It's the prisoners. Why wouldn't it be? The siren is the pivot. Otherwise, I was just about to kill the prisoners." Andrew Lincoln added, "Something else is afoot. Somebody is playing with them. So he instantly makes the call, and that's when he goes to the prisoners and says, 'You can be of help.' The arc of that episode is Oscar proving himself as a value to the group. He earns his place in the group, and he does that by saving Rick." In perhaps the most tragic scene ever on The Walking Dead. Lori Grimes delivered a speech to her son Carl to tell him it's going to be ok. Lori said, "You're going to be fine. You're going to beat this world. I know you will. You are smart, and you are strong, and you are so brave, and I love you." Well, it turns out the speech was somewhat planned. Sarah Wayne Callies, who plays Lori Grimes, said, "The baby represents for the group an incalculable boost to their faith, and I think she really recognizes that she is carrying inside her something with enormous meaning. And then I think she has a speech that she's rehearsed for months, which is what I'm going to stay to him when I die." What's most surprising though is part of Lori's motivation for the speech. She actually fears that Carl could be in danger of becoming a monster. Sarah Wayne Callies said, "She also does see if we're not all very careful Carl could become the biggest monster of all of us, because he had grown up bereft of children to play with and losing people, and he could calcify and become something horrible. " Creator Robert Kirkman added, "Carl is a child and he's being pulled in so many different directions and he wants to prove himself and so in that moment that's a child pushing himself to take that burden on and that to me is very sad." Another powerful scene in the episode was when Rick Grimes collapsed in sorrow at the end. Of that scene, Andrew Lincoln said, "It's only when he looks at the boy that he allows himself to accept what's just happened. This is someone who's been so strong. I wanted it to be the one moment where he breaks, where you see him fall, and this is the man falling apart." Oh, and if you wondered why there were two major cast member deaths in the episode, it looks like the producers did it intentionally to fool the viewers. Executive Producer Glen Mazzara said, "We put the T-Dog death in that episode, because we felt that would play to fans as if that was the death, and they would never expect another death, an even more horrific death."

The Walking Dead: Carl Could Become The Biggest Monster Of All