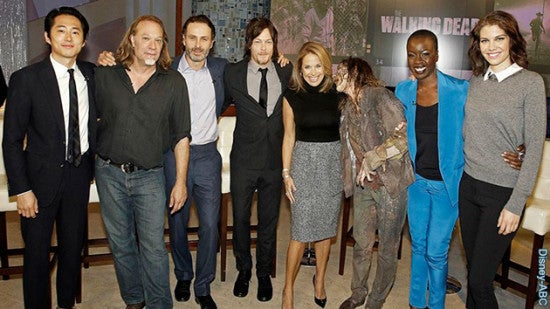 The producers of Katie Couric's talk show Katie have released the video from today's visit from the cast of AMC's The Walking Dead; you can see three segments--with the men of The Walking Dead (Andrew Lincoln, Norman Reedus and Steven Yeun), the women of The Walking Dead (Lauren Cohan and Danai Gurira) and a super-fan who's been made up as a zombie by Emmy-winning makeup guru Greg Nicotero. "Just to have that in the show, which is so brutal, to have that beacon of hope and love is really cool," Steven Yeun said of the romance in the series. "It's great." As Couric had teased in promos for the series (and ComicBook.com reported last night), Andrew Lincoln interrupted one of Danai Gurira's answers to suggest that she has a romance on the horizon. Her response--"Andy!" after having first dismissed it with an "Oh, yeah"--seemed provocative at first but it looks from the full clip (Lincoln says he's just joking after Gurira says she would defer to him to elaborate on his comments--that they're having a little fun with the fandom. You can check them out below. The "romance" talk is in the second segment.