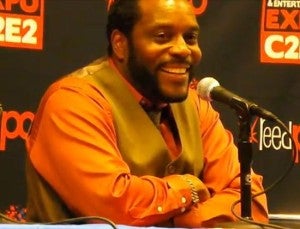 In an appearance this past weekend at C2E2, The Walking Dead's Chad Coleman answered questions about the show and his character Tyreese. In the comic book series, Tyreese hooked up with a couple of the ladies in the group, including Michonne. When asked if he thought anything was going to happen between Tyreese and Michonne on the TV series, Chad Coleman answered, "I want something to happen with that. You know, that's what I walk into the writer's room saying." Chad Coleman added, " Listen guys, so...I'm going to leave that alone, but let's just say I hope it happens, and you get to guess who it would happen with. So we'll see...stay tuned." The Walking Dead Season 4 will air on AMC in the Fall.

The Walking Dead: Chad Coleman Wants Tyreese To Hook Up With Michonne