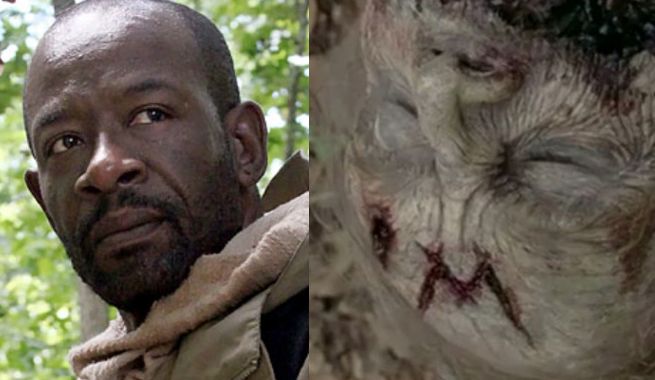 During the "Forget" episode of The Walking Dead, Rick, Daryl & Carol killed a walker with a big "W" on its forehead. At least, it looked like a "W," but another theory is that it could be an "M" for Morgan.

Could Morgan Jones be tagging walkers with an "M"? Maybe, he is holding the walkers down and marking the "M" on the forehead, and it just looks like a "W" when the walker stands up. It makes sense from the perspective of the fact that Morgan was teased in two earlier episodes, so there is likely some way he will work into the series before the end of Season 5.

Also, at the very end of the episode, Rick is shown walking down Morgan Street. Could that be foreshadowing that Morgan will soon be reappearing on the show?

However, there is one big problem with the Morgan is marking the walkers theory. There were also walkers in the truck outside of Noah's Shirewilt Estates community that were marked with the "W" or the "M." It also appeared as if the walkers had been in that truck for awhile. And the last time Morgan appeared on the show, he was traveling behind Rick's group.

Morgan would have had to gotten ahead of Rick's group, marked the walkers, and put them in the truck, which seems unlikely.

The Walking Dead: Could It Be An M For Morgan?

Forspoken's Latest Trailer Is Getting Destroyed for "Cringey" Writing